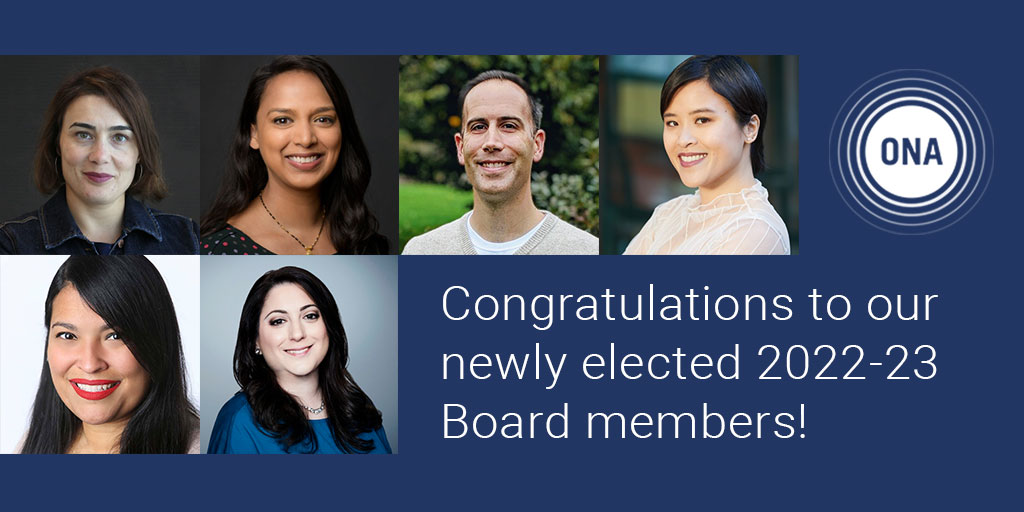 Members of the Online News Association, the world’s largest membership organization of digital journalists, elected Angela Pacienza, Executive Editor at The Globe and Mail, and Elana Zak, Head of Newsletters at Politico—and re-elected four incumbents to the 2022-23 Board of Directors. Their terms will begin Jan. 1, 2022.

Angela Pacienza has spent much of her journalism career driving culture change to support stronger journalism, innovation and audience growth. Angela has been involved in ONA since 2007, including as an organizer of the ONA Toronto group and part of the 2018 Women’s Leadership Accelerator cohort. When discussing her motivation to serve on the board, Angela emphasized the connection between workplace culture and meaningful, lasting relationships with news audiences. “I want to be there as we recover from this pandemic to make sure we invest the time and energy into hiring, developing and keeping the next generation of digital journalists.”

Elana Zak is a longtime organizer with ONA Local and describes her vision for the future of digital journalism as “more agile, diverse and has found a sustainable business model.” At Politico, she collaborates across the newsroom to strengthen newsletter content strategy and best practices. Speaking at the board candidates’ forum, she said  “As we resume having local meetings I think it’s a great opportunity to revitalize the connection between local organizers and further build out that support.”

The re-elected board members are:

The election winners will join board members who are serving their current terms through 2022:

The board will appoint two additional seats by the end of the year to meet specific organizational goals.

Candidates in the election were selected by the ONA’s Governance Committee from a pool of nominations submitted by ONA members. The committee reviewed candidacies and nominations based on five criteria, including thought and career leadership in ONA’s focus areas and a history of service to the association. ONA members as of Sept. 24 were eligible to cast ballots during the voting period Sept. 28–Oct. 18. Learn more about the board election results.