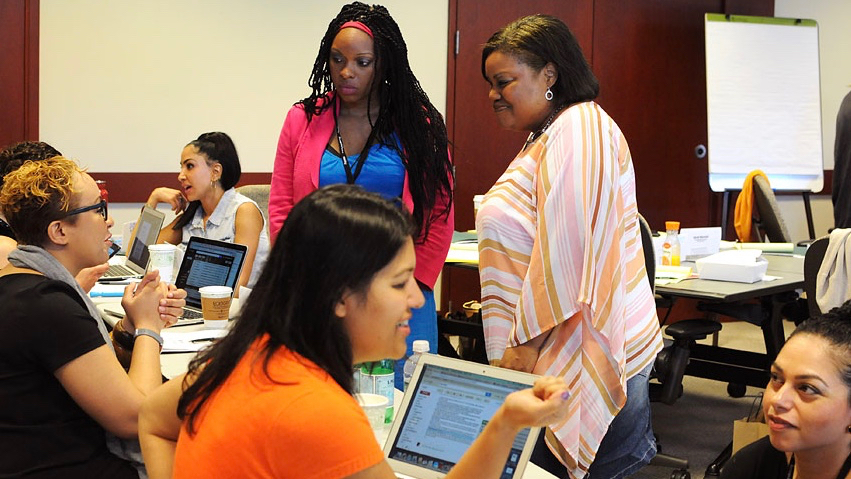 The 2019 Accelerator featured a year of practical, targeted guidance and personal coaching on individual challenges for women in digital journalism. The participating 26 women leaders were selected from a pool of more than 400 applicants. The program kicked off with a week of hands-on personal and professional work; candid discussions about leadership, work-life balance and problem-solving in the newsroom; and inspiring visits with leaders at Netflix and The Getty Museum. The cohort received an all expenses paid trip to ONA’s annual conference, ONA19, where they had their final workshop.

In 2018, the Accelerator was extended to offer check-ins throughout the year, which culminated with a workshop at ONA17 in Washington D.C. on Oct. 7, 2017. The initial program was held Feb. 25-March 2, 2018, at the University of Southern California’s Annenberg School for Communication and Journalism in Los Angeles. The participating 25 women leaders were selected from a pool of more than 400 applicants.

In 2017, offerings were expanded to meet demand, as both academies received hundreds of qualified applicants. Poynter and ONA are each offering trainings. ONA’s version became the Women’s Leadership Accelerator. It was held Feb. 5-10, 2017, at the University of Southern California’s Annenberg School for Communication and Journalism in Los Angeles. The participating 25 women leaders were selected from a pool of nearly 350 applicants.

Prior to 2017, the program combined the resources of the world’s leading digital media organization, ONA, with the global leader in professional journalism education, The Poynter Institute. It operated as the ONA-Poynter Leadership Academy for Women in Digital Media.

Our second class was held May 1-6, 2016, and focused on developing emerging leaders. The class consisted of 28 selected participants. The jointly-led academy was hosted for two years at Poynter’s campus in St. Petersburg, Fla.

Learn more about the Academy  Meet the 2016 Class

The inaugural Academy, held April 12-17, 2015, focused on critical skills for women moving up the ladder in digital journalism and technology organizations and documented the challenges they face on the path to leadership. The inaugural class consisted of 25 selected applicants and 16 leaders who provided training, mentoring and advice throughout the week.

The women were selected from a pool of nearly 500 applicants. You can learn more about the selection process here.