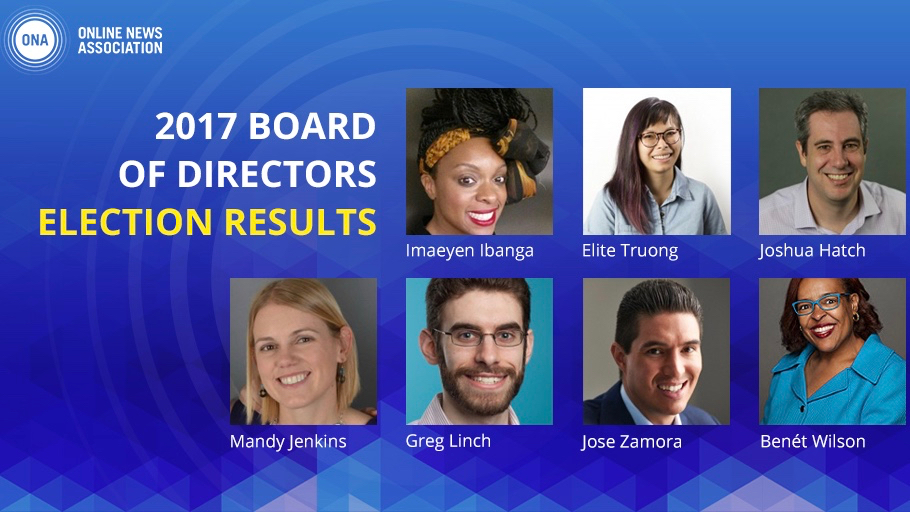 WASHINGTON, D.C. — Members of the Online News Association, the world’s largest membership organization of digital journalists, elected two new members to its Board of Directors and reelected five incumbents to two-year terms.

The newest directors, Imaeyen Ibanga, Web/Video Producer at NBC News, and Elite Truong, Product Manager, Partner Platforms, Vox Media, will join the Board Jan. 1, 2017. Click on their images below to read more about their visions for ONA. “The board is thrilled to welcome Elite and Imaeyen, both of whom will bring fresh perspectives and digital expertise, as well as our re-elected colleagues as we focus on advancing ONA’s strategic vision,” said ONA Board President Joshua Hatch. “I’d also like to thank our three retiring board members — Jody Brannon, Robert Hernandez and Jim Roberts — for their years of service and contributions to ONA. They have been critical to ONA’s success and we will miss them.”

The five re-elected members are: A 16th seat, appointed by the Board to help meet specific organizational goals, will be announced shortly.

Three current directors will leave the board after their current terms expire on Dec. 31:

At the close of voting, 416 voters — representing 16 percent of ONA’s eligible membership of 2,601 at the time of vote start — cast votes.

Elected/re-elected to six open seats were: