Sam Stewart, who is consulting with the Online News Association as the program lead for Journalism 360, talks about the Immersive Film Festival at the ONA19 conference and trends in the maturing storytelling style. Journalism 360 was founded by ONA, the John S. and James L. Knight Foundation and Google News Initiative.

Video by the ONA19 Video Team 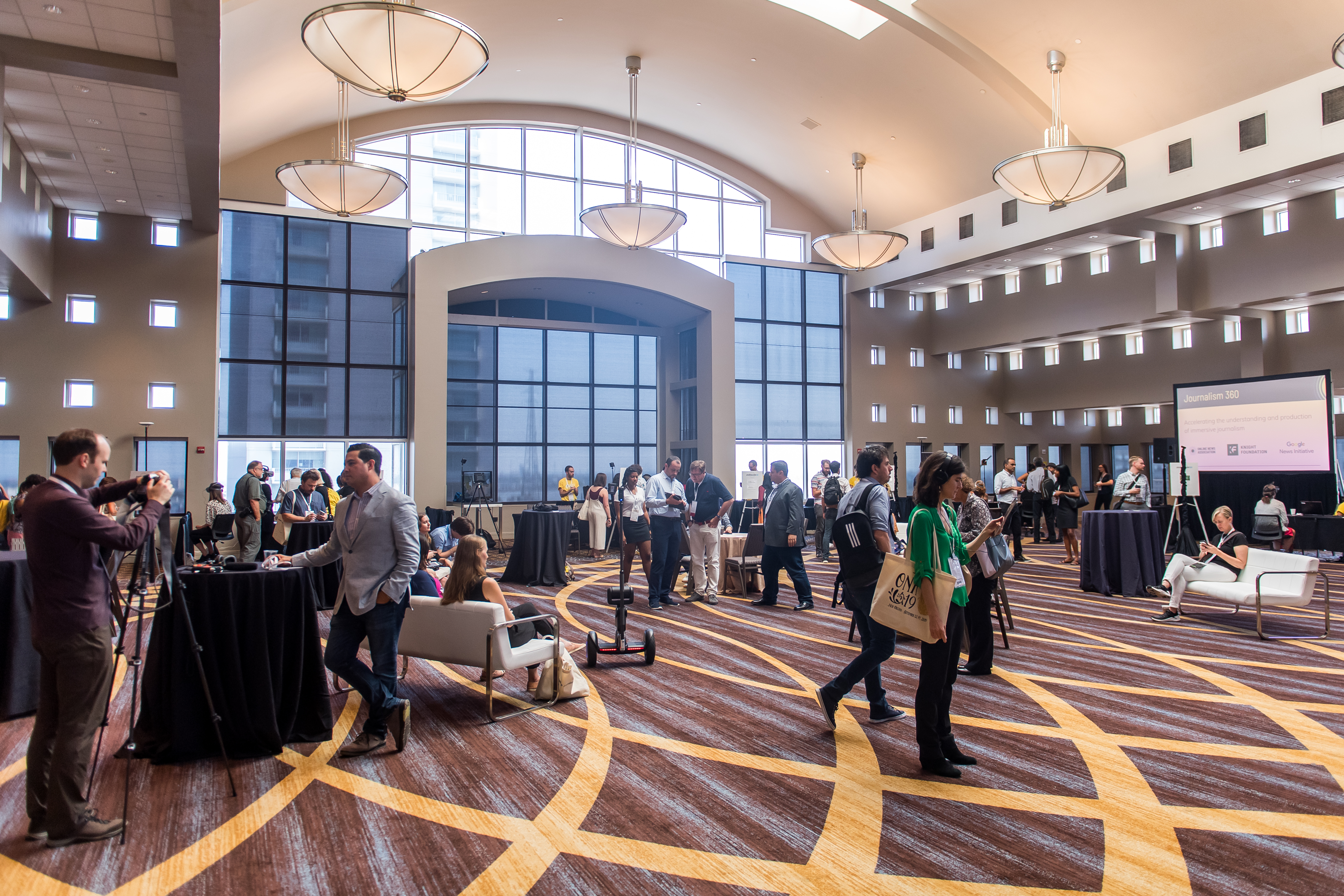 How can journalists easily capture and create lifelike 3D models of real-world crime scenes or newsworthy objects? What did it look like — as they shot it — during the Apollo 11 moonwalk in 1969?  How can journalists easily “spatialize” audio files captured in the field to use for virtual or augmented reality? What might it have felt like to experience a nuclear explosion first-hand on Enewetak Atoll?

All these questions and more were answered on Friday, Sept. 13 during the third annual Journalism 360 Immersive Storytelling Festival held during the Online News Association annual conference (ONA19) in New Orleans. The event showcased 17 projects from Journalism 360 Challenge winners, finalists in the Online Journalism Awards and other groundbreaking virtual reality and augmented reality explorations.

About 350 people attended the event and had the opportunity to experience immersive news content, learn from the creators and journalists about the decisions that went into each project and find inspiration to incorporate new and dynamic storytelling into newsrooms.

If you missed any of it, here is a full list of the presenters and projects. To keep up to date on all things immersive for news, sign up for the Journalism 360 newsletter.

The New York Times, Apollo 11: As They Shot It

Fifty years ago, Neil Armstrong, Buzz Aldrin and Michael Collins returned to Earth with one of the grandest travelogues ever made by humans. With their ever-present cameras, the astronauts showed us the moon landing through their eyes. This New York Times virtual reality experience transports you to the surface of the moon where a virtual gallery of photographs reveals a new perspective on the iconic images.

Homeless Realities is a multi-part series that uses 360/AR/VR/drones to tell immersive stories about homelessness and housing instability in Los Angeles.

What if your home becomes the place you fear? ​ An Iraqi father returns to Fallujah to face the threat of improvised explosive devices (IEDs). Through this virtual reality experience, join him in his home and discover the unfolding of a tragic event.  WARNING: This experience contains disturbing content. Viewer discretion is advised. It may not be suitable for people with photosensitive epilepsy or post-traumatic stress disorder.

An Anchorage Daily News and ProPublica investigation has found that more than 70 Alaska communities have no local law enforcement of any kind. In other villages, local leaders have no choice but to hire police with criminal records, even sex offenders, to patrol the town. This ongoing project, includes a 360-degree tour of life in some of the hardest-to-reach communities in the United States. 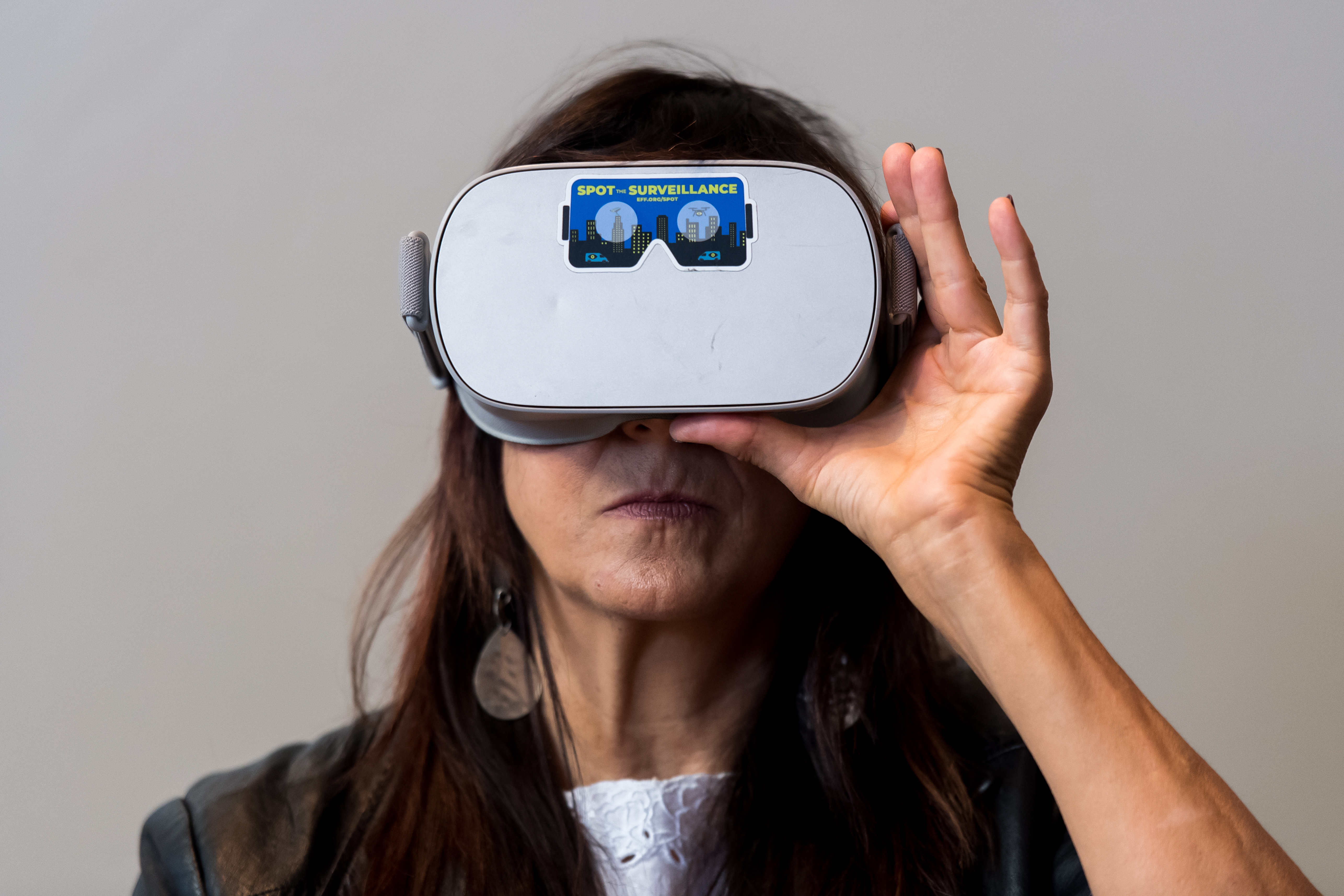 On December 1, 2012 Washington became the first state in the United States to legalize the use of recreational marijuana. Cannabis had been legal for medical use about 15 years prior. Now, like alcohol it is available to buy for those over age 21. It’s not just the female flowers that dominate; women are a driving force in the growth of the cannabis industry. So what it’s like to work in this new industry? Through the daily lives of four women, the viewer is given a unique look into the journey from seed to sale.

Fed up with years of abuse and oppression, the LGBTQ community fought back after a police raid. RYOT has creatively reimagined the events that took place in June 1969.

This interactive app prototype demonstrates story experiences that combine geolocation and mindfulness exercises to disrupt the way audio news stories are told and experienced, in order to re-connect listeners to the news, each other, and the world around them.

Airfield is a free web tool that lets you edit audio. It is 100% web browser based. You can import audio into Airfield from your device. When you are ready to export you have the option to create a file in Mono or Stereo, or you can Spatialize your audio for use in immersive projects for Virtual Reality (VR), Augmented Reality (AR), Mixed Reality (MR).

The Washington Post, 12 seconds of gunfire: the true story of a school shooting

“12 seconds of gunfire: The true story of a school shooting” is a powerful virtual reality experience produced by The Washington Post, based on an unforgettable front-page article by 2018 Pulitzer Prize finalist John Woodrow Cox. The story is illustrated in an immersive 360-degree film by award-winning animator Wesley Allsbrook (“Dear Angelica”) from an original script and audio from The Post’s team.

“1619: The will to survive” is an interactive augmented reality experience about the journey enslaved Africans made aboard the San Juan Bautista boat through the dangerous and deadly Middle Passage. The AR interactive was written by best-selling author Dolen Perkins-Valdez, narrated by storyteller Tamara Winfrey-Harris and showcases a painting by noted Hampton artist Richard Press Sr. Users will have the opportunity to step into a virtual representation of San Juan Bautista with spatial audio components, creating an immersive experience of being at sea. The experience guides users through historical events that have been researched and documented by USA TODAY’s editorial team, including the ship attack that led the enslaved Africans to Virginia.

“I want girls to look at me and think they can achieve anything they want,” says 17-year-old Rani, from Varanasi, India. Rani’s community and the Hindu caste system limits her family to washing clothes and linen for a living. But Rani is determined to finish school and train to become an army officer. In Girl Icon, Rani gives us an intimate glimpse of her life, hopes, challenges and dreams — and how she’s helping other girls in her community.

Ever wondered what a nuclear explosion would feel like first-hand? The Finnish Broadcasting Company Yle’s VR experience Paradise transports you straight to the heart of the Pacific Ocean, to Enewetak Atoll in the Marshall Islands. You will witness the first hydrogen bomb blast in history in an up-close-and-personal way. In the VR experience, you will also have a chance to see atoll’s life today. Walk on a vast concrete dome, which covers a crater left by a nuclear test, or visit a family and a school, where the legacy left by the US nuclear tests is ever-present.

If small community news organizations can create 360 videos you can too! We worked with the Center for Community and Ethnic Media to pair graduate journalism students from the Newmark Graduate School of Journalism at CUNY with journalists and editors from nine community organizations to produce stories from the first-person point of view. The journalists used 360 Camera Kits that cost less than $500 each and featured 4K 360-video cameras, monopods and accessories. The stories addressed topics including development plans in Willets Point, clean-needle distribution in Upper Manhattan and the oldest house in New York City. Check out the workflows and best practices from these collaborations in the Intro to 360 Production guide:

Hawaii is the bird extinction capital of the world. Many of the birds native to the islands are severely under threat, but for some it’s too late. The fabled ʻōʻō was last seen in 1985. Set in the painted cloud forest of Kauai, Songbird takes you back in time to meet the legendary bird and hear its last song.

To provide an alternative to studio-based volumetric capture, Volum is developing a low-cost and portable volumetric 3D video capture system using readily available hardware and software workflows. This includes a modular and scalable capture system that is field friendly. Each Volum module is built around an Intel RealSense depth camera ($150) paired to an embedded computer ($300) and solid state drive for simple, laptop-free setup and capture in the field.

What if any journalist could easily capture and create a lifelike 3D model of a real-world crime scene, a sculpture or a landscape of rainforest deforestation? Adding simple 3D modeling to the journalist’s toolkit can give any reporter in the field an engaging new format for sharing their stories and engaging audiences. And now, thanks to the integration of Augmented Reality frameworks into many social media platforms and mobile operating systems, publishing these models in formats that give our audiences powerful opportunities to view, manipulate and experience immersive elements is a process that’s possible for any size newsroom or reporting effort. Over the last 10 months, PBS NewsHour journalists have been experimenting with the best ways to use photogrammetry in the field to capture models that enhance their storytelling.

Spot the Surveillance works with VR headsets and browsers to place users in a 360-degree street scene where they are challenged to identify law enforcement surveillance tools, like body-worn cameras, automated license plate readers, by looking around the seen.

Journalism 360 is a global network of storytellers accelerating the understanding and production of immersive journalism. Our mission is to help news organizations, journalists, technologists, content creators and journalism educators experiment with all forms of immersive storytelling, including but not limited to 360 video, augmented reality, virtual reality and mixed reality.