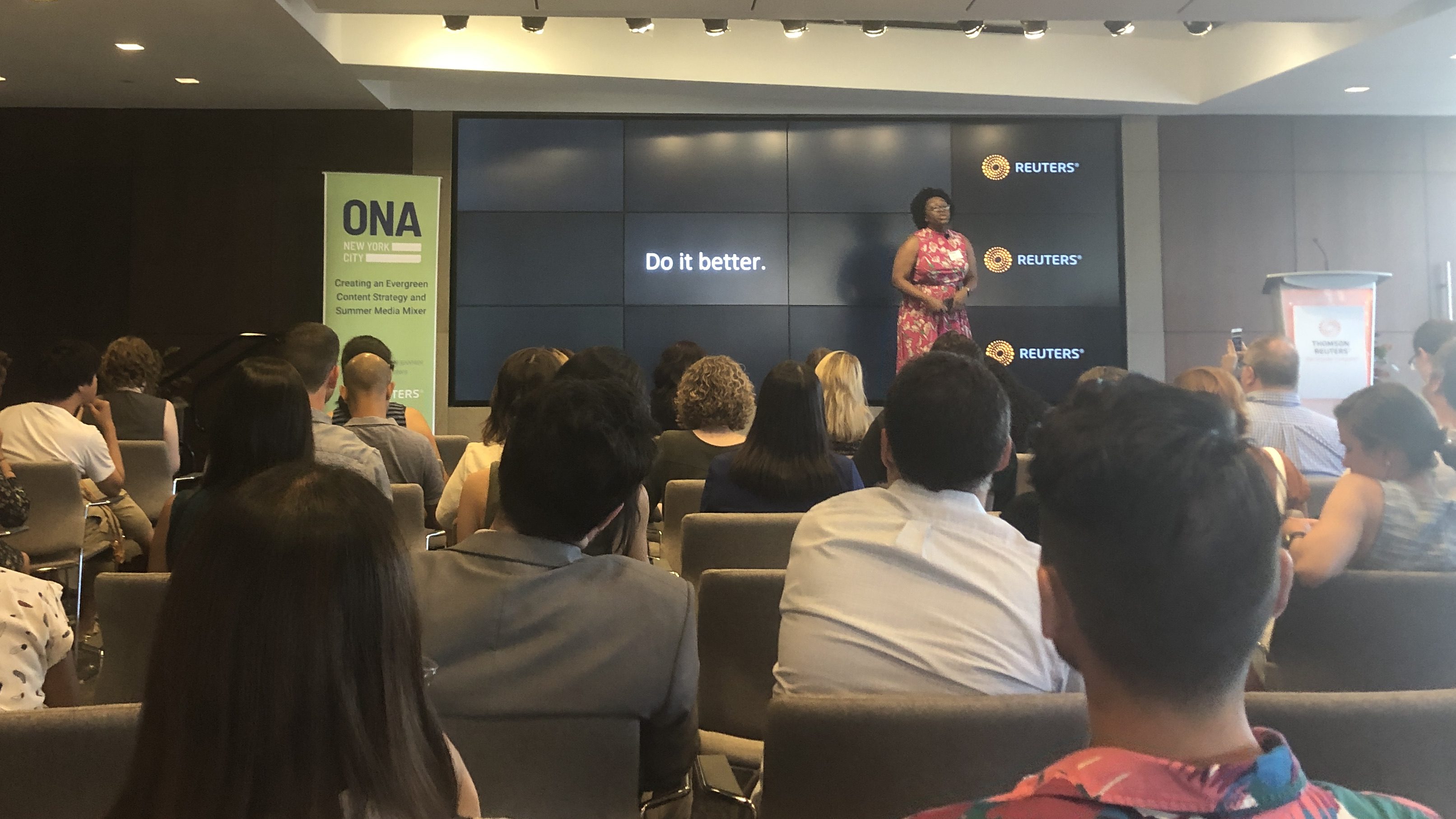 Creating an evergreen content strategy was the topic of ONA NYC’s most recent event on Thursday, July 25, where journalists, audience development editors and tech/product experts alike came together to share their expertise. The event was held at Thomson Reuters.

The main theme? How to make older, and timeless, evergreen content relevant today, and even into a strategy of its own.

Here are some of the main takeaways.

News is about speed

Phil Andraos of Reuters introduced us to Reuter’s Connect, an archive of their entire video library. After looking at the data behind the videos that users interacted with most over time, they found that one-fifth of all video downloads happen within the first two hours.

But what’s popular right now may not be popular later

That same deep dive into the Reuters Connect archive showed that certain content ages better than others. For example, lots of people watch disaster videos when they happen, but they have a shorter shelf-life than political content, which more people tend to watch long after the event.

Lenfest Local Lab, whose mission is to develop and support sustainable business models for great local journalism, built two apps to engage with evergreen content. They used published Philadelphia Inquirer stories on food and real estate to create apps that allowed people to interact with that specific content.

Lainna Fader looked at analytics from her publication and found that cartoons were among the best performing pieces of content on Instagram. She and her team used those findings to turn those archival cartoon pieces into its own stand-alone Instagram account: @newyorkercartoons. It now has almost as many followers as the main New Yorker account.

Fader called her system a glorified spreadsheet. Her social team adds stories on a regular basis to pull from later.

Phoebe Gavin explained that answering five major questions makes a great starting point for figuring out how to repurpose and resurface evergreen content: Who are your people? What are their questions? Where are they getting answers now? When do they need these answers most? Why should they stick around? Let the content serve a purpose or fill a need.

Gavin used a fun graphic to show how Google Trends can help journalists find the best times to publish SEO or evergreen content, ideally by timing the initial publication of potentially evergreen stories to hit before demand for that content will take off. Otherwise, if not ahead of that curve, it might actually make sense to hold off on publishing the content until just before the next cycle of interest in the topic.

Tim Herrera described how the New York Times’ Smarter Living was created. He searched archives for stories simply to re-social and in doing so realized that they answered questions that people still had today — and will have for a long time.

Above all else, put readers first

Herrera explained the main question to base an evergreen strategy on is this: How do we best serve readers? It is by answering this basic question that pieces like “How to pack your suitcase” get created. “That will always be valuable,” he said.

We concluded the event by eating some really great cake for ONA’s 20th anniversary. Learn more about ONA NYC and sign up for updates about upcoming events.