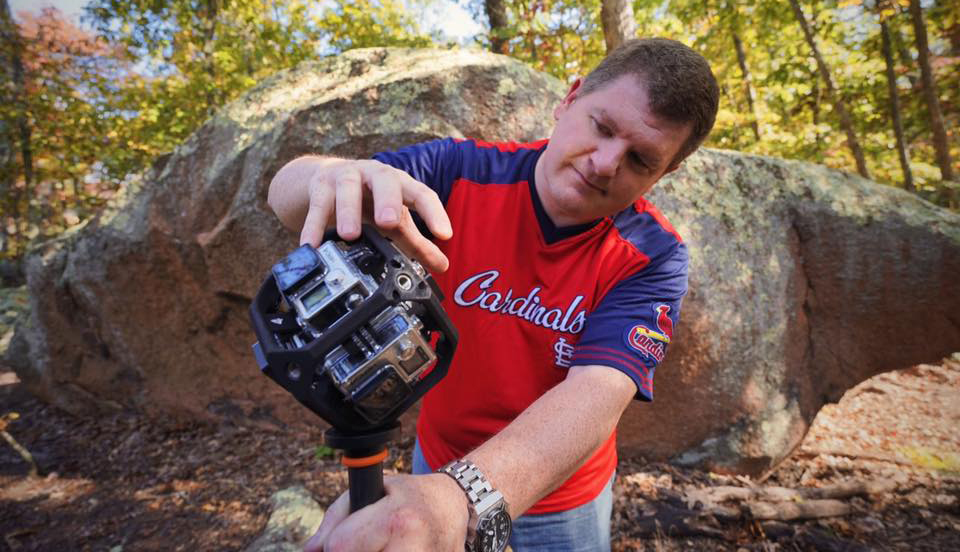 Washington, D.C. – Eleven projects that seek to help develop and expand best practices in immersive storytelling, including narratives, ethics and production, will receive a share of $285,000 as winners of the Journalism 360 Challenge.

Google News Lab, the John S. and James L. Knight Foundation, and the Online News Association launched the challenge in March as part of Journalism 360. Journalism 360 is a new initiative announced in September 2016 aimed at accelerating the use of immersive storytelling in news —including virtual, augmented and mixed reality and 360 video.

The winning projects will help advance Journalism 360’s mission of developing an international network of journalists to explore and share knowledge about their work in immersive storytelling. Each will receive between $15,000 and $30,000 to test, refine and build out an early-stage idea.

Several of the projects focus on making immersive storytelling technology more accessible, while exploring ways to engage audiences and produce stronger journalism. From a project that will test the use of augmented reality and data visualization to document a major national story—the building of a border wall between the United States and Mexico—to a tool that allows users to create virtual reality photo experiences from their smartphones, the winning projects are designed to inform and encourage news organizations to innovate, experiment and learn.

Teams will build on these ideas over the next six to 12 months. The cohort will be invited to attend ONA17 in Washington, D.C. this October and will share their findings at a demo day in early 2018. They will also be sharing their processes and learnings with Journalism 360’s network  throughout the year.

“The overwhelming response to the open call demonstrated that journalists are seizing the opportunity to use immersive storytelling to engage people in new ways,” said Jennifer Preston, Knight Foundation vice president for journalism. “There is still much to learn and the winners will help lead the way by identifying best practices and tools and expanding the Journalism 360 network.”

“We’re proud to support the first class of Journalism 360 grant winners. Each winner sits on the cutting edge of immersive storytelling, a new frontier in media. We’re eager to see these projects brought to life and become points of reference and education for the rest of the journalism industry,” said Erica Anderson, Google News Lab partnerships manager.

“We’re building a community of creators who can help bring immersive storytelling to a wider audience through grants, education, and training,” said Laura Hertzfeld, Journalism 360 program director.  “These 11 projects represent the breadth of ideas and innovation that Journalism 360 will cultivate in the coming months.”

The 11 winners of the Journalism 360 Challenge include:

Aftermath VR app by New Cave Media ($20,000 | Project lead: Alexey Furman | Kyiv, Ukraine | @alexeyfurman): Creating an app that would apply photogrammetry, which uses photography to measure and map objects, to recreate three-dimensional scenes of news events (such as mass shootings or natural disasters) and narrate what happened through voiceover and archival footage.

AI-generated Anonymity in VR Journalism by University of British Columbia ($30,000 | Project leads: Taylor Owen, Kate Hennessy and Steve DiPaola | Vancouver, Canada | @taylor_owen, @katehennessy, @DipaolaSteve): Helping reporters test whether an emotional connection can be maintained in immersive storytelling formats when a character is algorithmically distorted so that their identity is hidden. The tool aims to provide investigative journalists with a means to preserve the confidentiality of a subject, while using an animation to ensure viewers remain emotionally connected.

Community and Ethnic Media Journalism 360 by City University of New York ($27,000 | Project lead: Bob Sacha | New York | @bobsacha): Making immersive storytelling more accessible to community and ethnic media through a program that provides hands-on training and access to equipment. The team also aims to produce a “how to” guide for others on using immersive storytelling to cover local happenings, such as festivals.

Dataverses: Information Visualization into VR Storytelling by The Outliers Collective ($25,000 | Project lead: Oscar Marin Miro | Barcelona, Spain | @outliers_es, @oscarmarinmiro): Making it easier to integrate data visualizations into immersive storytelling through a platform that would allow the integration of virtual reality videos and photos with facts. For example, a user could show a map of the Earth highlighting places without water access and linking each area to a virtual reality video that explores the experience of living there.

Facing Bias by The Washington Post ($30,000 | Project lead: Emily Yount | Washington, D.C. | @PostGraphics, @emilyyount): Developing a smartphone tool that will use augmented reality to analyze a reader’s facial expressions while they view images and statements that may affirm or contradict their beliefs. The aim is to give readers a better understanding of the bias we all bring to a story and to improve trust in news by creating a personal connection to the content.

Voxhop by Virtual Collaboration Research Inc. ($30,000 | Project lead: Ainsley Sutherland | Cambridge, Massachusetts | @VCRconnect): Making it easy to craft audio-driven virtual reality stories through a tool that would allow journalists to upload, generate or construct a 3-dimensional environment and narrate the scene from multiple perspectives.  For example, a reporter could construct a three-dimensional crime scene and include voiceovers detailing accounts of what transpired in the space.

Scene VR by Northwestern University Knight Lab ($20,000 | Project lead: Zach Wise | Evanston, Illinois | @zlwise, @knightlab): Developing a tool that would make it easier for journalists and others to create virtual reality photo experiences that include interactive navigation, using their smartphone or a camera.

The Wall by The Arizona Republic and USA TODAY Network ($28,000) | Project lead: Nicole Carroll | Phoenix | @azcentral, @nicole_carroll): Examining the audience engagement power of combining an important national story with new technology by documenting all phases of the proposed border wall between the United States and Mexico. The project would use virtual reality overlaid with relevant data and include aerial video, as well as a series of documentary shorts.

About the John S. and James L. Knight Foundation:

Knight Foundation is a national foundation with strong local roots. We invest in journalism, in the arts, and in the success of cities where brothers John S. and James L. Knight once published newspapers. Our goal is to foster informed and engaged communities, which we believe are essential for a healthy democracy. For more, visit knightfoundation.org.

The Google News Lab was created in 2015 with a mission to collaborate with journalists and entrepreneurs to help build the future of media. Throughout the past two years, the News Lab has worked alongside news organizations and innovators around the world to help address the most important topics at the intersection of media and technology. In particular, projects and experiments focus around Trust and Verification, Data Journalism, Inclusive Storytelling, and Immersive Storytelling.