NYC Media Lab is one of the 2018 winners of the Journalism 360 Challenge. See all the winners.

New mobile augmented reality software platforms such as ARKit and ARCore present the opportunity to rapidly prototype new applications, test user experience design, and explore the efficacy of this new medium for informing and engaging users. NYC Media Lab and the Associated Press (AP) propose to explore the visualization of health and science news in augmented reality by creating and testing prototypes with users, and publishing the results.

Mobile augmented reality visualizations will be compared against traditional two-dimensional interactive data visualizations. Working with journalists and digital media experts at the Associated Press, NYC Media Lab will convene a team of graduate student designers and AR developers from across its university consortium to generate prototypes on topics such as space and the cosmos, sea levels rising in your backyard, color blindness/gene therapy and infectious diseases.

Over the course of 12 weeks, this university-industry team will develop and test prototypes and publish the findings of user experience testing. Through iterative design and feedback, the Associated Press will provide technical, design and journalistic mentorship to the university participants. 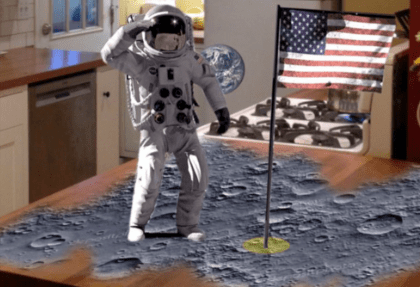 See more: The Associated Press: Visualizing the 50th Anniversary of the Moon Landing