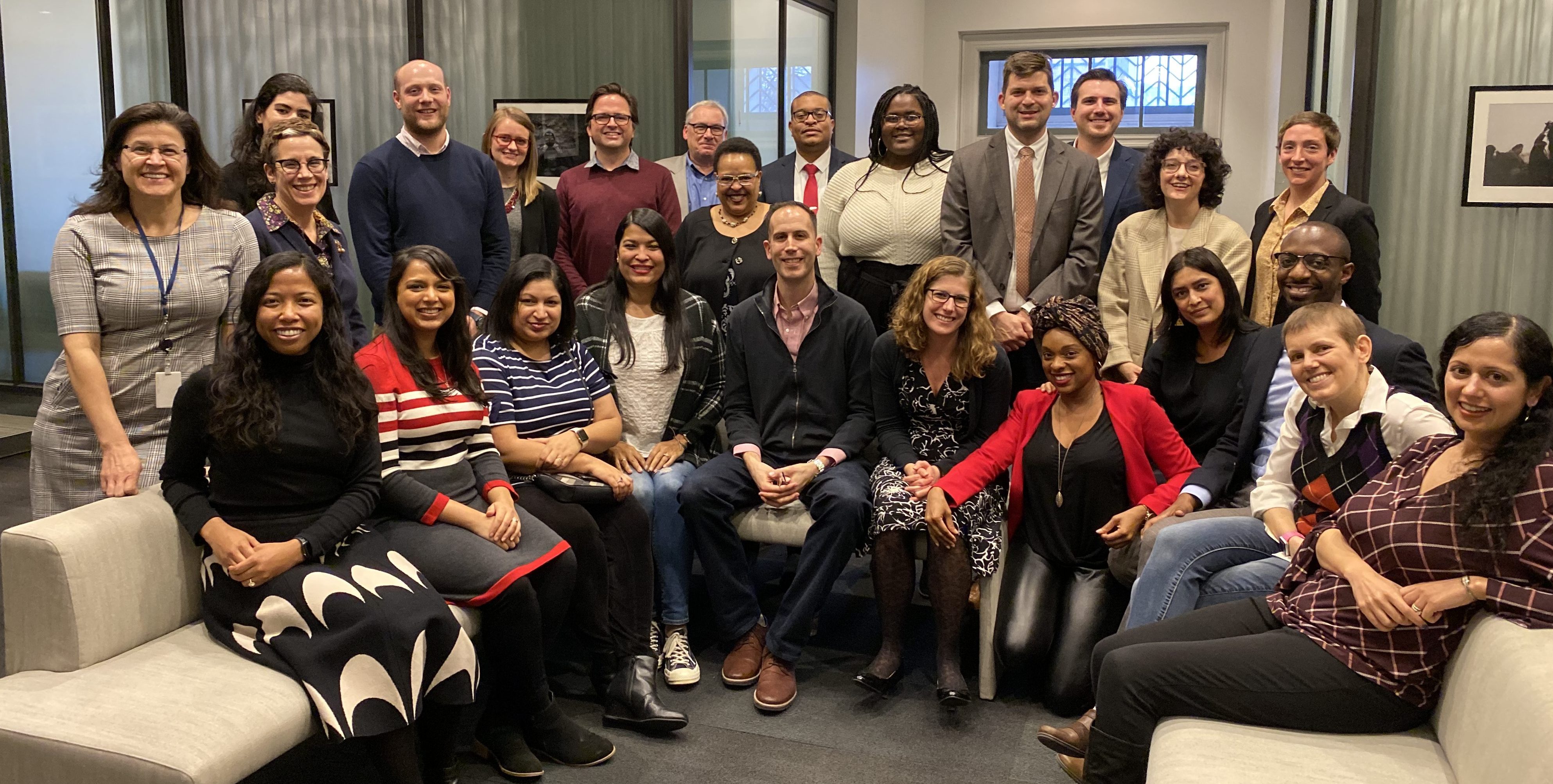 The Board of Directors and ONA staff in Washington, D.C. for the first board meeting of 2020.

The Online News Association is excited to announce new board officers: Shazna Nessa, President; David Smydra, Vice President; Celeste LeCompte, Treasurer; and Versha Sharma, Secretary. Officers were elected at the Jan. 24 board meeting in Washington, D.C. and assume their roles immediately. The President and Vice President will hold office for two-year terms, while the Treasurer and Secretary will serve one-year terms.

ONA envisions a journalism community that boldly innovates to better engage and inform the public. Key to achieving that vision is board leadership with wide-ranging expertise and demonstrated commitment to ONA’s values and work.

Shazna Nessa, President, is the Global Head of Visuals for The Wall Street Journal, where she leads the organization’s strategy for visual journalism with oversight of the graphics, photography, design and news developer teams. Prior to that, Shazna supported initiatives focused on innovation as the Director of Journalism at the John S. and James L. Knight Foundation. She worked closely with ONA while at the Knight Foundation and helped to develop programs such the Women’s Leadership Accelerator and Journalism 360. Shazna joined the board in 2018; she previously served as Board Secretary and vice-chair of the Awards Committee.

David Smydra, Vice President, is the Head of Product Experience at Google News, overseeing teams that manage structure content, audience development and publisher merchandising. Previously, David worked on Google’s News Partnerships team to improve collaboration between the journalism industry and the company’s many news products. David joined the board in 2014. His contributions to ONA include serving as co-chair of ONA15, chair of the Online Journalism Awards from 2016–2018 and Board Treasurer for two years.

Celeste LeCompte, Treasurer, is the Vice President of Business Development at ProPublica, where she works primarily on partnerships, product, and strategy. As a former reporter and editor, she brings a focus on developing business opportunities that are aligned with editorial and audience interests to her work on “the business side” of media organizations. Celeste joined the board in 2017 and has contributed her expertise to conference programming, the Online Journalism Awards and the strategic planning committees.

Versha Sharma, Secretary, is the Managing Editor and Senior Correspondent at NowThis, where she is in charge of the company’s emerging platforms strategy. As Senior Correspondent, Versha has also filed dispatches on immigration from the U.S.–Mexico border, reported from mass protests in St. Louis and traveled to Moscow, Russia for the show she hosts and produces, The Russia Desk. A longtime member of ONA, she has been part of the annual conference’s programming committee, the judging panel for the Online Journalism Awards and the 2017 Women’s Leadership Accelerator. Versha joined the board in 2018 and most recently was vice-chair of the Legal Affairs, News Ethics and Standards Committee.

We are grateful for the incredible support of outgoing board officers Mandy Jenkins, who will continue to serve as an at-large board member through December 2020, and P. Kim Bui, who was a board member from 2014–2019. Learn more about the Board of Directors.