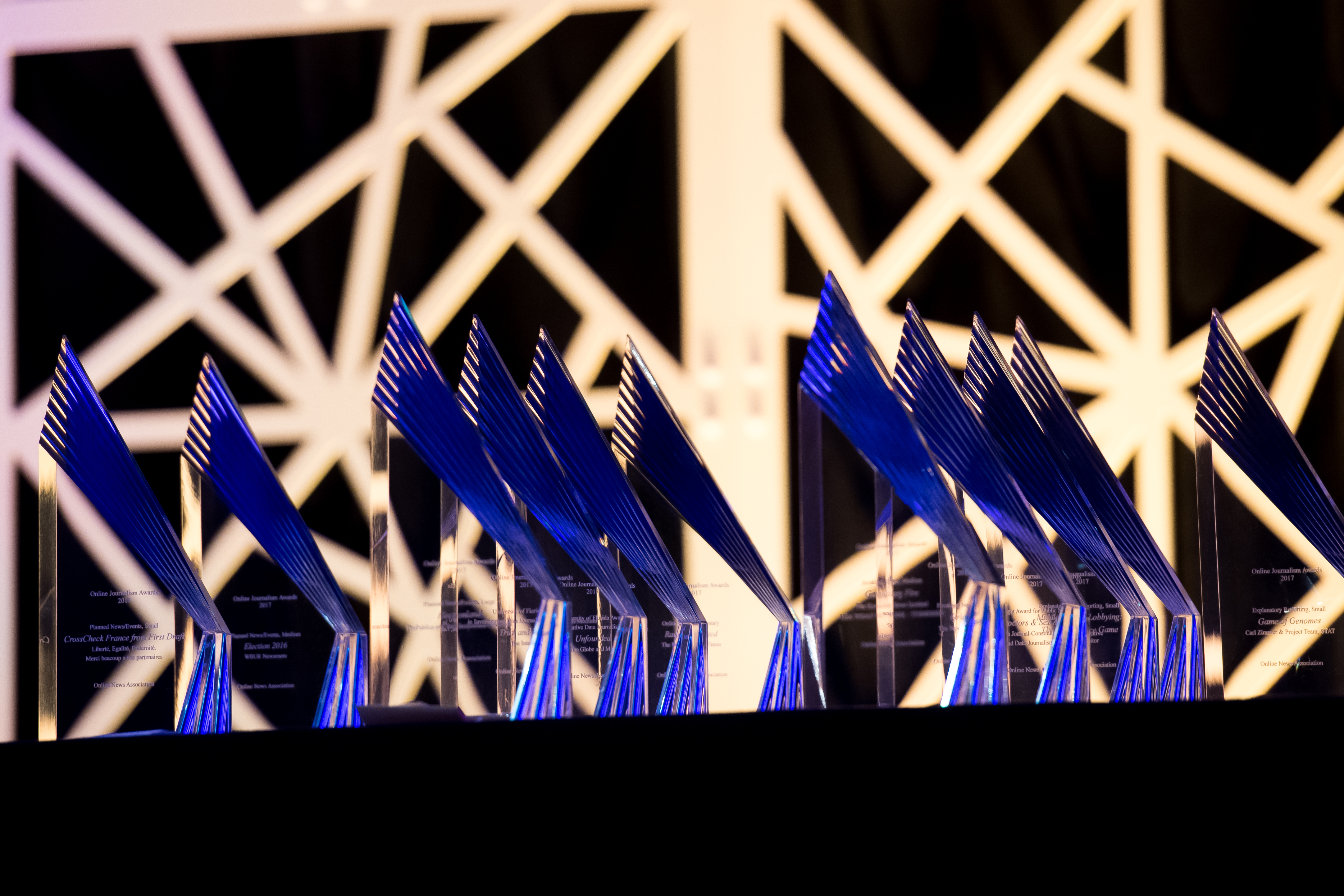 At the 17th annual awards dinner, emceed by host of WAMU and NPR’s 1A Joshua Johnson, Nexo Jornal, Le Temps and The Globe and Mail each took home a $3,000 General Excellence in Online Journalism award, courtesy of the Gannett Foundation. The $15,000 University of Florida Awards for Investigative Data Journalism were won by The Intercept and First Look Media’s “Trial and Terror” and The Globe and Mail for “Unfounded.”

The Knight Award for Public Service, with a $5,000 prize from the John S. and James L. Knight Foundation, went to The Atlanta Journal-Constitution for “Doctors and Sex Abuse.” The Guardian US Mobile Innovation Lab won the $5,000 Gannett Foundation Award for Technical Innovation in the Service of Digital Journalism for its app, “Live Notifications.” The Knoxville News Sentinel / USA TODAY NETWORK – TENNESSEE and The New York Times were recognized in the Breaking News categories.

Two new categories were added this year to honor evolving forms of journalism: Excellence in Audio Digital Storytelling, which recognizes exceptional efforts in telling stories through digitally-focused audio, including podcasts, audio-centric online works and other emerging media; and Excellence in Immersive Storytelling, which honors exceptional efforts in telling stories through digital, immersive media: virtual reality, augmented reality, mixed reality, 360 video and other emerging media. FRONTLINE and The Emblematic Group shared the Excellence in Immersive Storytelling category for their bold, compelling presentation in “After Solitary.” Reveal from The Center for Investigative Reporting, KNBA and AIR received the inaugural Excellence in Audio Digital Storytelling awards.

ONA also named documentary photographer and freelance photojournalist Tara Todras-Whitehill the recipient of the 2017 James Foley Award for Conflict Reporting for her unflinching coverage of vulnerable populations, particularly women and refugees, in the Middle East. Jim Brady was honored with the 2017 Rich Jaroslovsky Founder Award for his longtime work in digital media, including innovations in social and community engagement.

Here are the winners in each category, with links to their winning entries:

The awards ceremony, which was live-streamed directly from the Washington Marriott Wardman Park, will be available for viewing within 48 hours at awards.journalists.org/live.

Launched in 2000, the OJAs are administered by ONA and are the only comprehensive set of journalism prizes honoring excellence in digital journalism, focusing on independent, community, nonprofit, major media and international news sites.

About the University of Florida College of Journalism and Communications
The University of Florida College of Journalism and Communications is driving innovation and engagement across the disciplines of advertising, journalism, public relations and telecommunication. The strength of its programs, faculty, students and alumni — in research and in practice — has earned the college ongoing recognition as one of the best in the nation among its peers. The college offers bachelor’s, master’s and doctoral degrees and certificates, both online and on campus. The college’s strength is drawn from both academic rigor and experiential learning. CJC students have the opportunity to gain practical experience in the Innovation News Center, which generates content across multiple platforms, and a strategic communication agency with expertise in targeting messages to millennial audiences. The college includes seven broadcast and digital media properties and the nation’s only chair in public interest communications.

Journalism 360 is a global network of storytellers accelerating the understanding and production of immersive journalism. Our mission is to help news organizations, journalists, technologists, content creators and journalism educators experiment with all forms of immersive storytelling, including but not limited to 360 video, augmented reality, virtual reality and mixed reality. Its founding partners are the Knight Foundation, Google News Lab and the Online News Association.

For more information, contact: The Online News Association at awards@journalists.org.