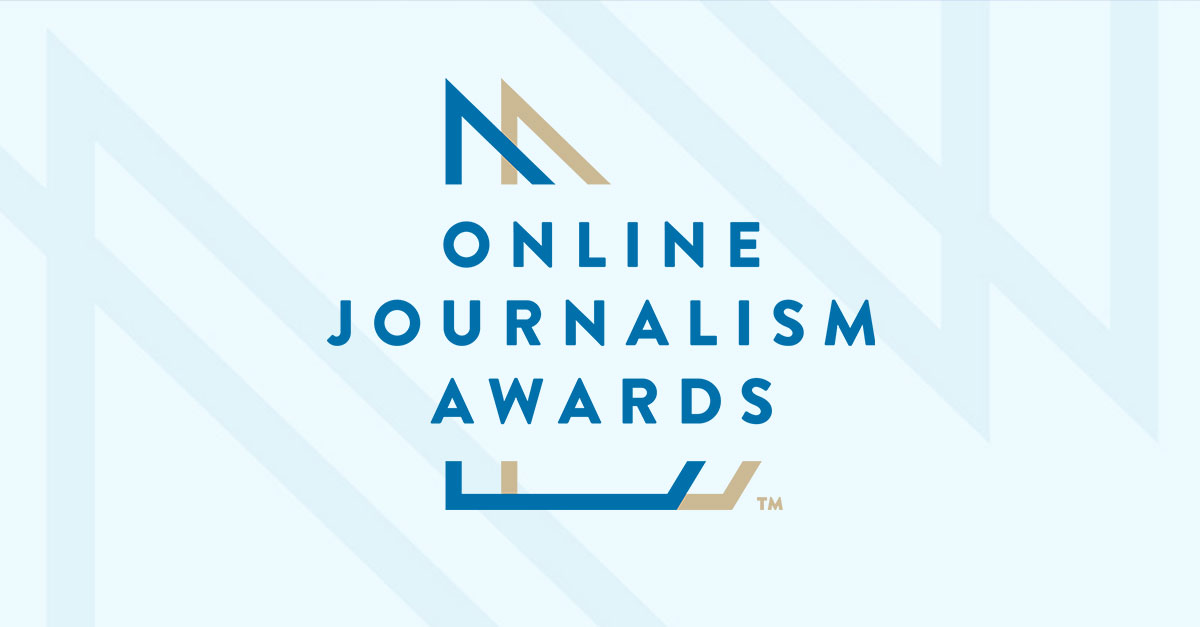 WASHINGTON, D.C. — Finalists for the 2017 Online Journalism Awards, representing a wide range of nonprofit, public, academic, major media and emerging technology organizations from around the globe, were announced today by the Online News Association.

A special selection committee also granted the James Foley Award for Conflict Reporting to photojournalist and multimedia producer Tara Todras-Whitehill. She is the third recipient of the award, which honors journalists reporting under the most challenging conditions. Todras-Whitehill has been documenting stories of vulnerable populations — especially women and refugees — in the Middle East region for over a decade.

“The selection committee felt Tara’s work sets a sky-high bar for digital journalism that’s practiced in challenging conditions and takes on critical stories and issues,” said Eric Carvin, Social Media Editor at The Associated Press and chair of the committee. “She’s exhibited a rare combination of bravery, digital savvy and eye-catching visual skills, and her work as co-founder of Vignette Interactive has driven storytelling in exciting new directions across the Middle East.”

The winners will be announced at the 2017 Online News Association Conference and Online Journalism Awards Banquet on Saturday, Oct. 7, in Washington, D.C. Joshua Johnson, host of WAMU and NPR’s 1A, will emcee the awards ceremony.

A group of 119 industry-leading journalists and new media professionals teamed up to screen 1,166 entries and select semi-finalists. Thirty judges representing a diverse cross-section of the industry then conferred to determine finalists and winners.

Explore all the finalists on awards.journalists.org

The finalists, many of whom push the envelope of innovation and excellence in digital storytelling and distribution, are:

The judges for finalists were:

* Judges were recused from discussing categories in which their own organizations were entered.

Launched in 2000, the OJAs are the only comprehensive set of journalism prizes honoring excellence in digital journalism.

Knight Foundation is a national foundation with strong local roots. We invest in journalism, in the arts, and in the success of cities where brothers John S. and James L. Knight once published newspapers. Our goal is to foster informed and engaged communities, which we believe are essential for a healthy democracy. For more, visit knightfoundation.org.

About the Gannett Foundation

The Gannett Foundation is a corporate foundation sponsored by Gannett Co., Inc. whose mission is to invest in the future of the communities in which Gannett does business, and in the future of our industry. It supports projects that take a creative approach to fundamental issues such as education and neighborhood improvement, economic development, youth development, community problem-solving, assistance to disadvantaged people, environmental conservation and cultural enrichment.

About the University of Florida College of Journalism and Communications

The University of Florida College of Journalism and Communications is driving innovation and engagement across the disciplines of advertising, journalism, public relations and telecommunication. The strength of its programs, faculty, students and alumni — in research and in practice — has earned the college ongoing recognition as one of the best in the nation among its peers. The college offers bachelor’s, master’s and doctoral degrees and certificates, both online and on campus. The college’s strength is drawn from both academic rigor and experiential learning. The college includes seven broadcast and digital media properties and the nation’s only chair in public interest communications.

Journalism 360 is a global network of storytellers accelerating the understanding and production of immersive journalism. Our mission is to help news organizations, journalists, technologists, content creators and journalism educators experiment with all forms of immersive storytelling, including but not limited to 360 video, augmented reality, virtual reality and mixed reality. Its founding partners are the Knight Foundation, Google News Lab and the Online News Association.