ONA Reno’s Digital Storytelling Workshop attracted guest speakers and media professionals from all over the West Coast. The event tackled a variety of topics, from the latest digital tools to unplugging from your newsroom. See the full schedule. 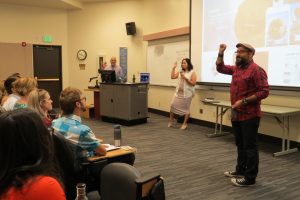 The apps and products featured ranged from tools for field reporting, like Apple Clips for captioning videos, to research aides, like the Google Chrome plugin Toby Tabs Manager. To wrap up, Victor Hernandez advised experimenting with these tools in your free time to find out what works for your needs, so you’re familiar with them when under deadline.

Caren Roblin stressed the importance of posting consistently and offered tips for Instagram, including using the rule of thirds when framing photos and posting candid pictures to offer a behind-the-scenes look at your company. She suggested holding on to photos and distributing them on a consistent schedule rather than blasting them onto the feed at once.

Resources: Watch the session live streamed on Facebook; view the slides and handout with ten tips for Instagram

Reaching New Audiences in the Age of the “Filter Bubble”

The session centered on media coverage during and after 2016 presidential election and reaching polarized audiences who may not hear or understand each others’ perspectives. Julia Ritchey stressed the value of looking for the stories of ordinary people interacting, beyond the politicians on stage. By traveling the country and analyzing the apps on people’s phones, Vincent Chang found many people, especially those living in rural areas, follow individual local news anchors and reporters instead of their employers. Jessica Estepa added news literacy is important, and that journalists need to better convey their role to citizens. 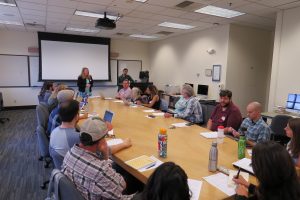 Katherine Mieszkowski and Cole Goins led a workshop on the foundations of podcast reporting. (Photo by Natalie Van Hoozer)

This three-hour session offered innovative podcasting approaches, like encouraging the story subject to tell the narrative in the present tense to help draw listeners into the scene. Participants broke up into small groups and collaborated to create an audio script, establishing the characters, conflict, place and stakes of the story. Participants left the session with fresh ideas for breaking out of the formulaic audio production mold.

Working Remotely: How to Connect (and Disconnect!) from Your Newsroom

Bui and Jones suggested people who work from home designate a specific area of the house for work, an office or even a table, to keep your “worlds” separate. Other signals, like putting on shoes or getting fully dressed, can also help you make the mental transition to the workplace. To combat a sense of isolation, they emphasized the importance of communication with colleagues through Skype or other mediums. Especially for those reporting on violent and tragic topics, discussing stressors and concerns with others is important.

Resources: View the list of apps, tools and resources 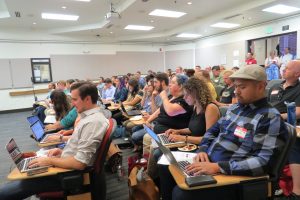 Nearly 100 attendees, staff and speakers came to the Reynolds School of Journalism for the workshop. (Photo by Natalie Van Hoozer)

During the final session of the day, Hernandez and Retsinas discussed live video tools and when (and when not) to use them. If the content of the news is such that it must be reported immediately, Hernandez and Retsinas say that live video can be used. But if the story can be written or produced later with the same effect, they encourage journalists to wait so that the use of live video doesn’t get out of hand. They discussed analyzing performance to understand what types of videos will be successful and how long those viewers will watch, saying usually people watch for fewer than three or four minutes. They also touched on reporter safety when shooting live video, suggesting bringing a reporting partner to watch your back.