Andrew Nguyen is a front-end developer and journalist at the St. Louis Post-Dispatch and leads ONA St. Louis. Join the Meetup group. 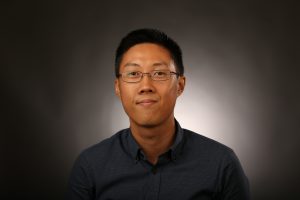 Being a front-end developer at the St. Louis Post-Dispatch gives me the opportunity to dabble in design, code and data. I love being able to collaborate with reporters on a mix of short and long-term projects. Having co-workers who are incredibly supportive and having the ability to take initiative, to learn and to experiment on various projects in the newsroom makes my work even more rewarding.

At my previous paper, the Brandon Sun, we produced a short documentary and longform feature called Knights of D-Day about five World War II veterans who were awarded France’s highest honor for their contributions in Normandy. The piece won an EPPY award and has also been named a finalist for a Canadian Association of Journalists award in the community media category.

I really enjoy playing quidditch and I had the opportunity several months ago to compete in a tournament in St. Louis. I’m currently nursing a wrist sprain, which has kept me away from the pitch, but I’ve played on-and-off for roughly seven years and travelled to Frankfurt, Germany last year as a commentator at the Quidditch World Cup.

Tell us what’s amazing about the digital journalism community in St. Louis.

Everyone in the St. Louis community has been incredibly welcoming, especially having moved to the city only six months ago. We had a packed house at our inaugural event at TechArtista and our group is a fantastic mix of journalists from magazine to radio and everything in between. We have a lovely volunteer team and co-organizer Kelly Moffitt, who helps coordinate our monthly meetups and has been a ray of sunshine.

When I was four years old, I was fascinated by space and I could have easily seen myself becoming an astronomer. In high school, I was doing a lot of environmental work and I became passionate about urban planning. Realistically, I’m hoping to pursue a master’s degree in the future and become more involved in journalism education.

Name a person (they can be a historical figure or living) you’d love to have at an ONA St. Louis meetup.

Our volunteer team got together recently to discuss potential themes for our monthly meetups and one of the ideas we were looking to explore was side hustles. I’d be honored to have Amanda Hesser of the James Beard Award-winning website Food52 as one of our guest speakers. Hesser served as a feature writer and food editor at the New York Times before starting the publication and even made an appearance in the movie Julie & Julia.

Last year, I got the opportunity to spend two weeks with my mom and my sister traveling to Ho Chi Minh City and Hanoi in Vietnam. It’s been more than two decades since I’ve been back and it was an amazing experience to see how much the country has developed, to eat all the delicious, local food and to spend time with family. We drank Vietnamese iced coffee at every opportunity we could find, marveled at Ha Long Bay and cautiously walked through scooter-filled streets.

I’ve been reading Increment, a quarterly magazine on software engineering, from Susan J. Fowler and Philipp Antoni of Stripe, about how effective teams work. I’ve also been listening to the documentary-style podcast First Day Back. Their second season features the story of a woman who is charged with first-degree murder after shooting her husband, but claims to have no memory of the event.