Hannah Wise is the engagement editor for The Dallas Morning News and leads ONA DFW. Join the Meetup group.

I love being able to hear and share incredible stories. I’ve long believed that everyone has a story to tell. To have the privilege of listening to stories and then sharing them professionally is incredible.

I’m incredibly proud of being part of The Dallas Morning News’ team that covered the July 7, 2016 ambush on Dallas police and the aftermath. I was working on the breaking news team at the time and assigned to cover the protest that night on Facebook Live. I was still live and about half a block away from where the first shots were fired. I stayed live for about 45 minutes later until my phone died. Those first days of coverage were some of the hardest and most sleepless days of my career, but I am so incredibly proud to have been a part of the newsroom. Our staff covered days of funerals for officers, vigils in the city and hosted events to discuss racial tension in the community.

While I am immensely proud of our work, it makes me heartsick because of the horror that initiated it all. I am proud that in the months that followed our journalists have committed themselves to transparency, listening to our audience and engaging in active conversations about some of the most difficult issues of our time. I’m proud to work in a newsroom alongside other journalists who stand up and say, “I care.” 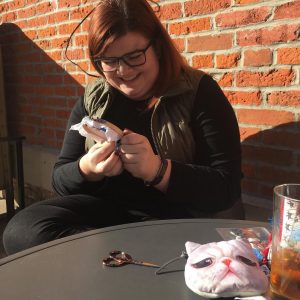 Embroidery! I am the stitching maven behind @SewManyComments on Instagram. I don’t read the comments, I sew them. I learned to sew from my mom and grandmother when I was in elementary school. After covering the July 7, 2016 ambush on Dallas police I needed to find a focus for my energy that did not involve screens. I picked up a hoop and thread and my ultimate hobby was born.

Tell us what’s amazing about the digital journalism community in Dallas/Ft. Worth.

Our community is immensely collaborative and supportive of one another. We are unique in that our members are professional journalists, students and educators. We members who work in broadcast, print, online, radio, technology and those who are just interested in the advancement of media and journalism. We also come from an incredibly large geographic area. Despite all of our differences, we want to find ways to collaborate and hold honest discussions about what we can do to improve our community.

I thought for a long time that I wanted to be a pediatric oncologist — I know, I know, what a terribly depressing line of work for a 13-year-old to envision for herself. But chemistry didn’t take with me in high school and I was convinced I’d fallen behind for that dream. But I loved to tell stories and I found my way to journalism instead.

I think about what I would do now if I weren’t working in journalism and I would probably go back to art school to become a fiber artist and spend my days stitching, weaving, drinking copious cups of coffee and tending to a house filled to the brim with plants. In my mind, my fabric-filled future looks like something out of an IKEA or Marimekko advertisement.

During my aforementioned abysmal experience in high school chemistry, I made the argument that I didn’t want to write the same term paper on the factors of global warming as my classmates. I had pitched interviewing doctors and researchers and writing about the chemistry that goes into various chemotherapy treatments. My chemistry teacher didn’t buy it, but my student newspaper adviser saw my potential.

She set me off to find stories and share them. It was the most natural fit. I loved interviewing, writing, designing pages, planning coverage of big events and challenging the status quo within the school. Those days hitting the pavement, pasting up with rubber cement glue and personally delivering papers with ink-stained hands for the Independent Voice were the foundation upon which my career was built.

Name a person (they can be a historical figure or living) you’d love to have at an ONA DFW meetup.

I would love to invite Mary Woodward Pillsworth to one of our meetups. Pillsworth was a 24-year-old reporter in The Dallas Morning News’ Womens’ News department when shots rang out from the Book Depository in Dealey Plaza on Nov. 22, 1963. She returned to the newsroom and was asked to write her recounting of the events. She left The News to join the Peace Corps less than a year after the assassination.

Pillsworth has a perspective that I think is worth hearing more about. She covered an incredibly terrible event in history that clearly had an effect on her. I would like to hear her speak more on her decision to leave The News and what she has learned since.

All the Single Ladies by Rebecca Traister is my go-to book recommendation right now, and could be for a long time. Seriously, read it whether you are a single lady or not.