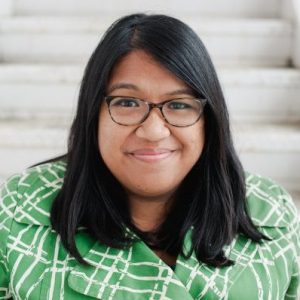 I’m a month into a new job at USA TODAY as the new lead writer and editor for its politics blog. After taking a break from covering politics and government, it’s great to be back in the swing of things — especially since I’m now part of a team covering the Trump administration. It’s already been an interesting ride, to say the least.

During the aforementioned break, I was at National Geographic, where I worked on a team to relaunch the organization’s homepage. The redesign was the combined efforts of editorial, design and product to create something that truly represents one of the best known brands in the world. So much love to that team.

I sing a lot. In two choirs, in a competitive karaoke league, in the shower, in my car. It keeps me sane.

Tell us what’s amazing about the digital journalism community in DC.

We have people doing everything, literally: experimenting with VR and drones, launching new products, digging into investigations. I’m amazed every day by the kind of work this community does. There’s so much that I can’t keep track of it all, to be honest.

I think it’s one of those things that I’ve always known. My mom likes to tell people about how I used to pretend to be a news anchor when I was little. I made a kids-only newspaper when I was 8. I was editor of both my middle school and high school papers. I’m one of those kids — and proud of it.

Everyone should watch Crazy Ex-Girlfriend. It’s the smartest thing on TV (and a musical to boot). AND the first two seasons are on Netflix. You’re welcome.

Tell us about someone who’s profoundly influenced your career.

Debbie Bruno, who is the reason I am in D.C. in the first place. She offered me an internship and then she offered me my first full-time job, both at Roll Call. I don’t know where or who I would be without her. Thank you, Debbie!

Do Not Spill Your Coffee, Estepa