Christopher Wink is the editorial director and cofounder of Technically Media, a 25-person digital media company that publishes Technical.ly and Generocity.org. He helped relaunch ONA Philly in 2011 and has been active ever since. Join the Meetup group. 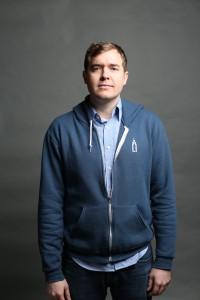 At my day job, we hosted this Tomorrow Tour initiative, a six-city tour of entrepreneurship communities with Comcast as a title sponsor. It included community reporting and event gathering and helped deliver on goals for Comcast and fund our own work.

Creative writing. Writing was my first love, then as an undergraduate I found journalism, so I still harbor fantasies that someone might actually want to read words in the order I choose to put them.

Tell us what’s amazing about the digital journalism community in Philly.

The Pen and Pencil Club, one of the country’s oldest surviving members-only private club. We just hosted our annual news awards and nearly all the news orgs and local news leaders were represented. Many are part of or at least know well ONA and there is a really strong sense of identity and community here. ONA Local has played an important role with the P&P and other efforts like the annual Barcamp News Innovation to foster that. I question if any media community in the world straddles our mix of being a big city news ecosystem that is as connected as ours.

In 2005, I reported a feature for my college newspaper The Temple News and a handful of state legislators called me back and I was all like: “omg these people actually call me back and answer my questions this is my life calling.”

Something entrepreneurial and/or trying to make some kind of creative writing life last.

What’s your favorite thing about being involved with ONA Philly?

Building a community of professionals who can compete in the day and share at night. Getting new people into the spirit of journalism.

I was snorkeling with sharks on the Belize Barrier Reef, which, you might not know, is the world’s second largest, this December. Earlier in the year I went to Havana with my wife, who is also a journalist.

One of my resolutions for 2017 is to read at least one new writer of color I haven’t read before each month. Prompted by her new novel, I finally read Zadie Smith’s White Teeth for my January.

Launch community journalism outfits with our mix of revenue to find sustainability.