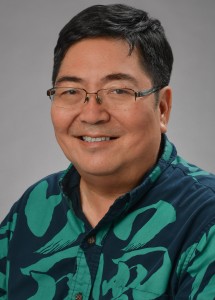 As a journalist, I loved telling stories that helped people, that exposed situations that needed to be changed. I also loved that every day is different, filled with new challenges and new things to learn.

I recently changed jobs and am now communications director for the Hawaii state office of AARP. But I love the same things about my new work. I still tell stories and help people, and I’m learning something new every day.

I also love food, travel and trying new things. That’s why the food editor of the paper approached me to do a column on food. I like learning about new cultures and tasting whatever the traditional food is, even if it’s something I’ve never thought of as food. In Hawaii, you can get almost any food in the world because there are so many immigrant groups. So every other week, I tried something new and sometimes scary. The column was called “Should I eat this?”

I started with an ant egg omelet and ended my eight months as a columnist eating silk worm larvae. In between, I ate rat in rural Thailand, blowfish in Japan and Rocky Mountain oysters in Denver during ONA16. Every print piece had a video that ran online and that we posted to social media.

It’s related to the food column—traveling and discovering new things to eat.

Tell us what’s amazing about the digital journalism community in Hawaii.

It’s really just starting out. We’re a little isolated here in Hawaii. It’s hard for people to travel to conferences and the local reporters here aren’t fully aware of trends on the mainland. The good news is that people like to travel to Hawaii and friends in the online journalism community have been good about giving a night of their time to do a meetup, even if they are here in Hawaii on vacation. So if any of you are coming to Hawaii and want to share knowledge over drinks, the first couple of beers are on me, if you can come to a meetup.

When I was in seventh grade, I had to choose an elective. I had a crush on my English teacher, who was also the journalism advisor. So instead of signing up for another year of band (I played the French horn), I picked newswriting. I liked finding things out, being the first to know and telling other people about it. One day, I came home and, to the great disappointment of my mother, announced that I would become a reporter and not a doctor.

I have been fortunate to have been able to report about local stories in other countries. I’ve covered stories about Hawaii in more than a dozen countries. I kept a file of stories I wanted to do in other countries and looked for fellowships, or asked for work days and expenses if I was going to be somewhere on vacation, or jumped at chances to go overseas on assignment. It gave me a chance to travel and open my horizons to other cultures and experiences, and it gave my readers a chance to learn how, even though we are different from other places, the world is interconnected.