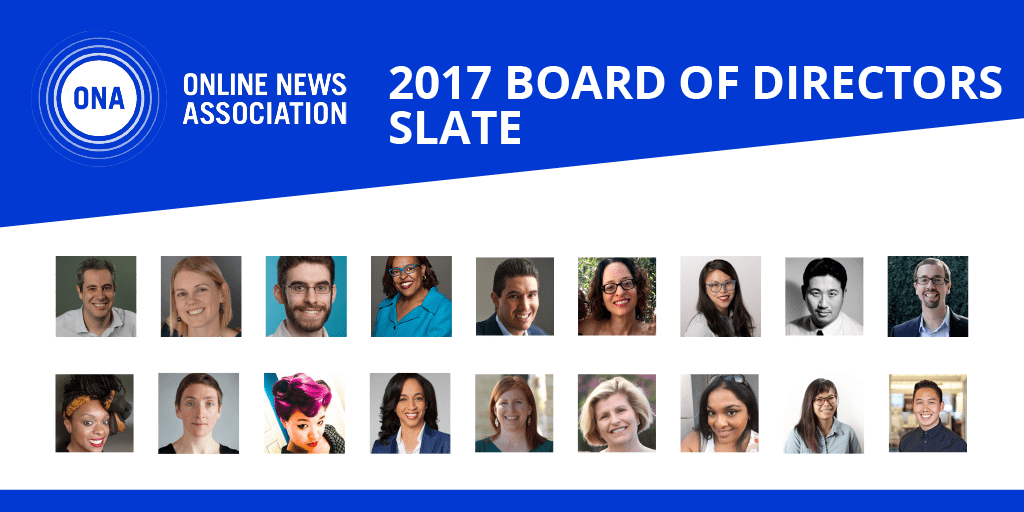 We’re happy to announce the nominees up for election for the 2017 Board of Directors for the Online News Association.

A total of 18 candidates — 13 new nominees and five incumbents, representing a wide and diverse range of digital media — are running for seven open seats.

There are a total of 16 seats on the ONA Board; one is an appointed, non-voting student representative. For the 2017-18 Board term, there are eight seats open, with one seat reserved for appointment to address needs as determined by the Board, leaving seven seats open for election. Terms are for two years and begin Jan. 1, 2017.

Here is the slate; head here to find out more about the candidates and their visions for ONA.

Current Board members Jody Brannon, Past Vice President; Past President Meredith Artley; Robert Hernandez and Jim Roberts have chosen not to run for re-election.

Voting will open Sept. 13 and close Sept. 30. Winners will be announced in October. All ONA members in good standing as of Sept. 12, 2016, are eligible to vote. Renew or join here to ensure your vote.

To give ONA members insight into each candidate’s views on the future of ONA and digital media, candidates will be invited to appear in an interactive session on Thursday, Sept. 15 during the 2016 Online News Association Conference in Denver.

During the campaign, candidates will be encouraged to use any and all social networking tools at their disposal to tell voters how they will help move ONA forward.

Good luck to the nominees, and, as always, we thank our members for your participation in this important process — and for being a vital part of our growing digital community.