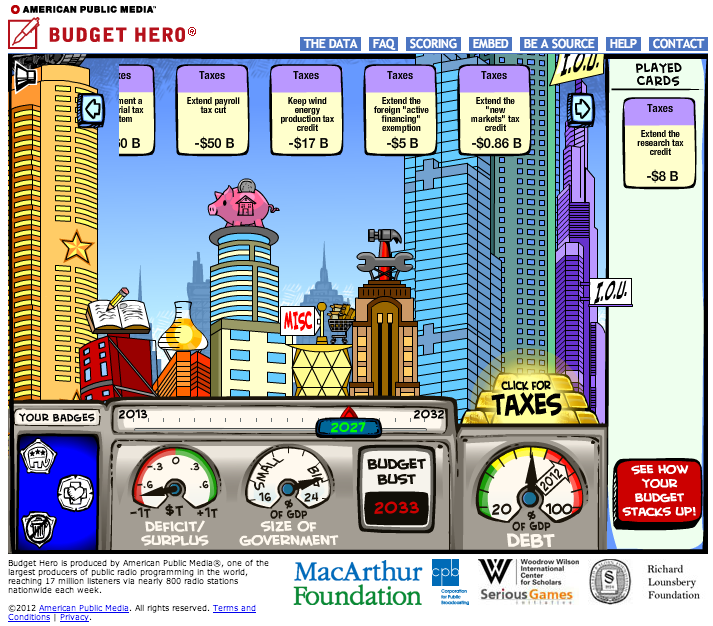 I’ve been a gamer since I was three years old, when I got a Commodore 64. The love affair hasn’t diminished. If anything, at the age of 30, I realize how significant an impact the games I’ve played have had on my life.

It’s difficult to imagine a situation where gaming, more often a means of entertainment and distraction, can be used to communicate important and real ideas. How can shooting virtual terrorists in Call to Duty or growing a fantasy farm in FarmVille inspire complex game development ideas? While it’s true that not all games are built for narratives or help the player understand a real-world system, many can.

Few news organizations are experimenting with gaming, but American Public Media struck gold, I think, with its Budget Hero game. In it, the player experiences the complexities — from many perspectives — involved with balancing the federal budget. One example: how would a Tea Party politician approach the budget challenges vs. a Progressive? Granted, the game is education-oriented, but it still finds a way let the player “play” a budget watchdog, with a good chance of gaining insight into why it isn’t as simple as chopping this program, or raising those taxes. Games can show news audiences the complexity of real-life problems. They can also pique interests.

When I talk to people about the potential for marrying gaming and journalism, I often bring up Civilization. The series has been around for years: Players can pick a historical civilization — say, the Aztecs — and help shape its growth through the ages. This turn-based strategy game became popular in part because it immersed players in a world they could impact and control.

As a child, the fantasy aspect of Civilization captivated me, but within the game there was also a feature called the Civopedia that really brought it home. It detailed all the concepts behind the game, but the wiki also provided real-world context to virtually everything in it.

You can build the Great Pyramids in the game, but you can also learn their historical importance; and although you didn’t need to dive into the history to play, it made the game more grounded in reality.

I’m pretty confident that Civilization is what initially piqued my interest in history. I would find the information in the Civopedia limiting, and so I would dig into encyclopedias to find out more about this concept called Democracy, or these people called the Babylonians. The educational aspects weren’t in your face, but they were there, embedded in the rules and structure of the game, enough so that it piqued curiosity and planted seeds of interest. Civopedia in the game Civilization explained in-depth information about the historical characters.

And this is the power of games. If done right, a game can fully immerse a player in a world with its own set of rules, characters and systems. To succeed, the player must not only learn the rules, but engage in the story. Now imagine if the rules, the stories and the content of the game were grounded in the real world and produced by journalists trained in the art of telling stories.

You could read about how the Food and Drug Administration’s budget has been systematically slashed over the years to the point that inspectors barely have the resources to do basic inspections at ports. Or you could take on the role of an FDA inspector over time, from when its budget was large and the number of imports low, to the present day when the opposite is true.

The game shows you first-hand the futility of trying to inspect all the imports coming in. By the time the game is over, you understand there are critical problems that need to be addressed in the bricks and mortar FDA system.

If journalists can learn to tell their stories while entertaining and educating an audience — and maybe even make money in the process — that’s some serious gaming magic.

This is the third in a series of blog posts from the first ONA class of AP-Google Journalism and Technology Scholars describing their experiences, projects and sharing their knowledge with the ONA community.

John Osborn is a graduate student at University of California, Berkeley, working on newsgames that explain the U.S. political system.