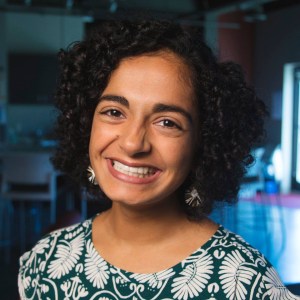 Sheila Raghavendran is a Cincinnati native and will be graduating from Indiana University-Bloomington next spring with a degree in history and certificate in journalism. During the last three years at Indiana University, Sheila has enjoyed getting involved with campus and community theater and radio. Outside of journalism, she loves good food, comedy and long drives with friends. In summer 2018, she interned at WYSO Public Radio where she was a Chips Quinn Scholar. Last year, she was a fellow with the Asian American Journalists Association’s VOICES college program. She worked with a team on an investigation into America’s newsroom diversity specifically at eight major news organizations. While working on that report, she learned about the issues of minority employee retention and promotion and how it effects minority-community coverage in newsrooms. She hopes that as a journalist, she can help make a positive difference.