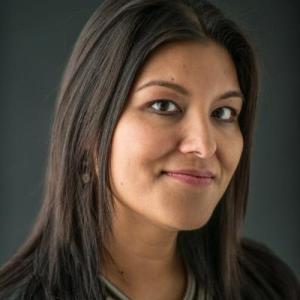 Mitra is the vice president for programming at CNN Digital. She is a past president of the South Asian Journalists Association, a member of the National Association of Black Journalists, and has spent much of her career diversifying newsrooms and the journalism they produce. Mitra has written two books, “Suburban Sahibs” about how immigrants redefined New Jersey and, thus, America, and “My Two Indias,” an economic memoir about globalization. She is at work on a third about school segregation. Mitra previously served as managing editor at the Los Angeles Times, executive editor of Quartz and as a senior writer and editor at the Wall Street Journal, Mint (India), the Washington Post, Newsday and the Associated Press. She is married to the artist Nitin Mukul and they have two girls, ages 12 and 5. They eat, laugh and live in Jackson Heights, Queens.

S. Mitra Kalita is the incoming managing editor at the Los Angeles Times. She was previously executive editor for Quartz and the site’s founding ideas editor. At the Wall Street Journal, she oversaw coverage of the Great Recession, launched a New York City section and reported on the housing crisis as a senior writer. She launched Mint, a business paper in New Delhi, and previously worked for the Washington Post, Newsday and the Associated Press. She is the author of three books and has studied seven languages. She has taught journalism and previously served as president of the South Asian Journalists Association. She is at work on a book about school choice through the Spencer Fellowship. Born in Brooklyn, Mitra was raised in Long Island, Puerto Rico and New Jersey — with regular trips to Assam, India. She has two daughters and one mutt and one husband.