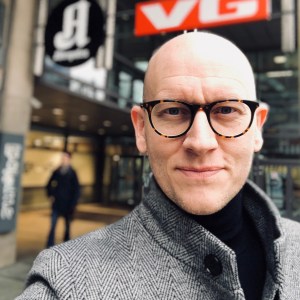 Ola Stenberg (38) has since 2014 been the Executive Digital Editor in VG – Norway’s #1 online news site. Ola has been in the forefront to develop VG to become one of the most successful news brands in Scandinavia and Europe, both in readership and economic results.

Ola is journalist educated and has worked as a reporter and video journalist for many years before he started his passionate journey of development and innovation.

Ola has been responsible for the turnaround of the newsroom – from being traditional print-oriented, to become highly qualified in the understanding of modern journalism and storytelling on online platforms.

Ola is responsible for a strong portfolio of new initiatives in VG and is also the head of product development and innovation. He is especially focused on VG being attractive to younger readers. VG is now the only Scandinavian media house on Snapchat Discover, and has managed to get 300.000 daily readers in the age between 13 and 25 on their edition. This year he´s also launched a new news app for younger readers, called “Peil”. Ola is also responsible for VG´s very successful digital subscription-service.

As a candidate for the 2019-20 Board of Directors election, Ola had a statement read as a lightning talk at the ONA18 conference and submitted the following information. Learn more about the election process.

I’ve been following and joining the work of ONA recent years because of our high focus on online journalism and innovation in the newsroom in VG. Especially with our editorial development team we’ve seen a lot of synergies on our work and the mission of ONA. With our editorial developers, designers and data journalists we´ve had ONA as our most valuable organization to get input on the big changes our industry is experiencing.

More than ever we need to meet across boarders and companies to share and learn from each other. The rapid changing media industry is creating many new problems but more important it is creating more opportunities than ever. If we look back at recent years there´s been to much talk about how the global giants are attacking and taking all the money, instead of how the new world of great opportunities can make journalism and storytelling better and stronger than ever.

In VG I have been focusing on how we can create a stronger young audience. Most recent and in my opinion most fun was building the news app Peil. We are far from the finish line on the product but on making it we decided to be very thorough on user research. Long story short we found a lot of young people who told us about content overload and that we tend to make stories to complex. Journalists write for journalists. So we started to create news – both visually and textually – on par with the feedback. Now we get dozens of emails from young people who love the product every week. That gives me so much energy to keep on working to make journalism better for the next generation readers.

The last couple of years I have also been focusing a lot on innovation and development IN the newsroom. I truly believe that you need developers on the news desk to create innovation at its best. Our editorial developers also have in their mandate to make VG a strong player on data journalism. As a highlight VG exposed the largest child sexual abuse forum in the world in October 2017. No one was supposed to know who was behind the website. That changed when our team of investigative reporters and Einar Otto Stangvik started to work. Stangvik is a new generation news reporter: Hacker, security specialist, developer, photographer, journalist and what not.

The opportunities for greater journalism through data, coding and other skills is another thing I have done my best talking loud about. This is so important for the modern journalism and even though we have come far there´s a lot more to be done. I believe we need more people in media organizations that truly understand and care about product development, from technology, UX to data and insights. We see product development in our media products at its best when we manage to combine skilled editorial staff with product, tech, UX, commercial and data/insight teams.

I represent Norway´s largest news site and one of the most successful news brands in Scandinavia and Europa in both readership and economic results. As a part of Schibsted Media Company I also represent media brands across Norway and Sweden. I´m lucky to work in a media market that shines compared to a lot of other markets. That network is something I would like to share and use to create good conversations about how we can create even more success!

Ola Stenberg (38) has for the four last years worked as the digital editor in VG – Norway’s No. 1 online news-provider. Ola has been in the forefront in the development of VG to become one of the most successful news brands in Scandinavia and Europe, both in readership and economic results.

Ola is educated journalist, and before he entered VG he worked with several local and national news outlets in Norway. In VG he has worked across news, sports and entertainment. As an educated video journalist he later joined VGTV. With his innovative mindset, digital understanding and creative journalistic thinking, he was responsible for many of the biggest successes VG has experienced within the web-TV-format. (E.g. mixing news, entertainment and events like “The World’s Longest Interview” (more than 30 hours – qualified for Guinness Book of Records), and making the coverage of the World Championship in Chess into a all-time-high viewer-magnet. But first and foremost he positioned moving pictures as an important part of storytelling both in news and feature.

As digital editor in VG, Ola has been responsible for the turnaround of the newsroom – from being traditional print-oriented, to become highly qualified in the understanding of modern journalism and storytelling on online platforms – based on data and insight.

Ola has responsibility for all the start-ups and niche-sites run by VG, with a portfolio of brands within tech, fashion, health and weight -reduction, travel, food and wine.

He is especially focused on VG being attractive to younger readers. He therefore has ensured that VG is the only Scandinavian media house on Snapchat Discover, with 300 000 daily readers in the age between 13 and 25. This year he is also working on launching into market a separate NewsChannel and news app for younger readers, called “Peil”.

Ola is responsible for VGs very successful digital subscription-service, a freemium model with 30 % growth in the number of subscribers so far this year.

As the digital editor he is responsible for product and technology in VG, and the mandate for him ans his tema is to innovate as close to core business as possible.

Ola is not only a resource in VG, but also work cross-brand with product and technology-development within the Schibsted-company, and with the major media houses in Norway and Sweden.

Ola Stenberg will be a tremendous resource for ONA and the Board of Directors if elected. In his daily work in VG, he lives both the ONA mission and vision, as he inspires, create and innovate every day.

He is a very experienced and trained journalist, with a high ethical standard and a deep understanding of the importance of independent reporting – especially in the times we are living now.

Ola Stenberg is visionary and an excellent speaker. and is invited as a keynote-speaker to conferences all over the world.

As a member of the Board of Directors, Ola Stenberg will be a great asset not only for the Board – but the whole ONA network.