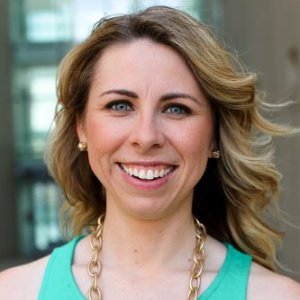 Meagan is Director of Digital Content for Tribune Broadcasting, guiding over 40 television stations nationwide with their digital and social strategy and development. Meagan also collaborates with the technical and developer side of the digital television world, advising on user experience, workflow and design – and communicating newsroom needs to developers. Previous to working at Tribune, Meagan was Director of Digital Operations at Local TV, LLC and executive producer of Interactive Content at WDAF-TV. She also planned and led the digital efforts for KPLC-TV as the team rode out and reported on Hurricane Rita as it made landfall in Louisiana in September 2005. Meagan is often in front of the camera as well, contributing weekly segments at FOX 4 in Kansas City. When not online, Meagan has completed two half-Ironman races, two marathons and what her chiropractor calls “too many half marathons.”

It’s hard to share an example of just one project that I’ve worked on recently — but the biggest project that I’ve wrapped up in the last year has been transitioning all of our TV station websites to an updated theme and training those newsrooms on how to use the new tools at their disposal for storytelling. KTLA is an example of one of the stations that moved to an updated theme for its site.