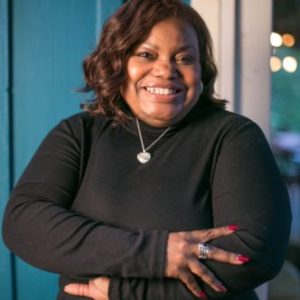 Tracie Powell is a leader in philanthropic efforts to increase racial equity and diversity in news media. She is the founder of The Pivot Fund, which seeks to support independent BIPOC community news.

Powell is a Fall 2021 Shorenstein Center Research Fellow at Harvard Kennedy School, where she is researching mechanisms for funding and capacity building for media outlets run by and for BIPOCTM (Black, Indigenous, other people of color, and traditionally marginalized) communities. Powell is also the board chair of LION Publishers, a professional journalism association for independent news publishers where she has served on the board since 2017.

Prior to her work with The Pivot Fund and Harvard, Powell was founding fund manager of the Racial Equity in Journalism (REJ) Fund at Borealis Philanthropy. Powell is also the founder of AllDigitocracy.org, which focuses on the media and its impact on diverse communities. She was a senior fellow with the Democracy Fund, where she worked on the Public Square initiative that seeks to support informed dialogue through nonprofit journalism investments. Powell was a 2016 JSK (Knight) Fellow at Stanford University and has written regularly for the Columbia Journalism Review and Poynter Online. Her work has been highlighted by countless journalism and academic institutions, including Harvard’s Nieman Journalism Lab. She is a graduate of Georgetown University Law Center and The University of Georgia’s Henry W. Grady College of Journalism and Mass Communication.