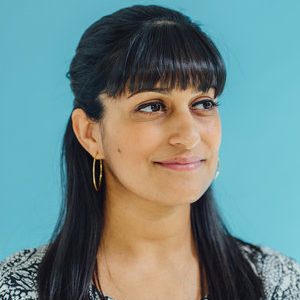 Anika Anand is cofounder of The Evergrey, a daily e-mail newsletter helping Seattleites feel more connected with their city, and storytelling director of WhereBy.Us, a digital media startup and parent company of The Evergrey.

In 2018, she was selected to join the Poynter Leadership Academy for Women in Digital Media and was named one of the 50 most influential women in Seattle by Seattle Met Magazine. Previously, she worked for The Seattle Times Education Lab as its engagement editor and for Chalkbeat as its product and engagement director.

She has a bachelor’s in journalism from UNC-Chapel Hill and a master’s in business and economics reporting from the CUNY’s Craig Newmark Graduate School of Journalism. Originally from North Carolina, she lives in Seattle with her husband and newborn son.

When selected as an MJ Bear fellow, Anika was Director of Engagement at Chalkbeat, an education news network.

While a student, she was a Dow Jones News Fund Business Reporting intern, a Bloomberg Scholar and a Poynter Institute College Fellow. She also interned with CNN, Business Insider, Salon, MSNBC.com and California Watch (now the Center for Investigative Reporting).

Anika also volunteered for three months in Haiti telling stories about local Haitians for an NGO, served as a teaching assistant for multimedia and video storytelling classes at CUNY and studied abroad in Florence, Italy.

After graduation, Anika reported for GothamSchools, a news site covering New York City’s public schools. GothamSchools later became part of the Chalkbeat network, which also includes bureaus in Colorado, Indiana and Tennessee. Anika is now the director of engagement for Chalkbeat and also the project manager for MORI (Measures of Our Reporting’s Influence), a WordPress plug-in that allows Chalkbeat reporters to set and track progress toward meeting editorial goals and track the impact of their reporting. Anika also helped design training guides and MORI resources and helped launch the tool in February 2014.

“I know it’s important to make those in power accountable and to shine a light in dark corners,” she said, “but once you actually do that, how do you know the difference that you’ve made if you’ve made any at all? I think this is a problem digital journalists are most suited to solve given all the tools at our disposal.”

Her recommender, Aron Pilhofer, Executive Editor of Digital at The Guardian, said, “Here you have a young journalist talking about analytics and engagement at a level of sophistication that most newsrooms have yet to achieve, including my own.”

The Selection Committee said: “Anika was a standout because of her interest in discussing and growing solutions to help journalists measure their impact — as well as her current role helping develop MORI, a tool to measure the impact a story is having on readers. In the always-running, more-with-less newsgathering organizations of our current world, measuring and analyzing data, especially engagement metrics, can help journalists work smarter and be more valuable to their readers and communities.”