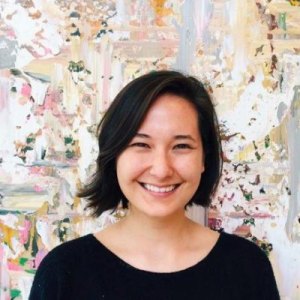 Alex is the co-founder and moderator of Pay Up, a Slack-based community dedicated to fostering conversations about the gender wage gap. It has 300 members, all women in technology, who chat about topics such as salary negotiation, “mansplaining” and “imposter syndrome.” Pay Up also includes Q&A sessions with experts and roundtable sessions allowing members to share their opinions. The discussions also generate story ideas and sources for The Washington Post website and print product.

“By creating contention as a hyper-specific segment, Pay Up is creating a new niche of Washington Post readers,” she said. “I could see us replicating this model with other underserved demographics — first-generation immigrants or single mothers, for example. It would be a way for large institutions like the Post to listen to the communities that aren’t often heard, and to serve them with the journalism that reflects those experiences in an authentic way.

“As a journalist, all my work is dedicated to exploring stories and perspectives that subvert the way we understand our world — whether it’s finding new, unexpected uses for platforms like Slack, or talking to first-generation immigrants on Instagram about what it’s like to cast their votes for the first time.”

See a video describing the project below:

The MJ Bear Fellowship Selection Committee said, “This digital native put her skills to the test with the creation of the Pay-Up, a private, Slack-based community dedicated to fostering conversations about the gender wage gap. By taking a simple assignment about starting a conversation about the wage gender gap and returning with an an invitation-only group, the goal of ‘building true, authentic communities where members find human connections’ was off the ground. Her creative project and unique approach to story development combined with her high potential for growth catapulted this project to the top.”

Said her recommender, Herman Wong Editor, Social Media at The Washington Post: “Alex Laughlin has shown herself to be an exceptional young digital journalist with a uniquely creative mind, a vigorous intellect, and, most important, the ability to get things done… Where she excels the most is in taking an inchoate story idea and coming up with a creative approach. This is on full display with the Pay-Up project… [It now has] a vibrant community of hundreds of women online, drawing story ideas, garnering positive press coverage, while increasing our fluency with a technology that will only become more prevalent.”

In addition to her job at the Post, Alex is host and producer of “The Ladycast,” an interview-based podcast about women who have accomplished major achievements in their professions. Prior to joining the Post, Alex was audience engagement producer for the National Journal. She is a graduate of the University of Georgia with a bachelor’s degree in Women’s Studies and a minor in English. While at Georgia, Alex was a founding member of the ONA student group and served as its outreach director.