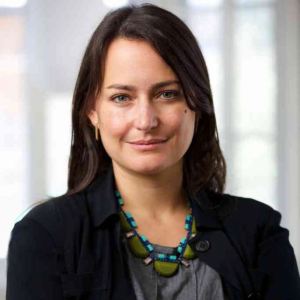 Carolina is a media entrepreneur and co-founder of Radio Ambulante, a groundbreaking Spanish language podcast that uses long-form audio journalism to tell neglected and under-reported Latin American stories. Carolina serves as Executive Director of the project, and is passionate about solving the problem of inequality of access, and democratizing the kinds of stories being told across the region. Before co-founding Radio Ambulante in 2011, she worked as a promoter for cultural and social projects, creating a bridge between organizations in her native Colombia, and public and private institutions in Latin America and the United States, designing and managing festivals and art exhibits, teaching workshops and planning fundraising events. Carolina was a John S. Knight Journalism fellow at Stanford University 2014/2015. Carolina Guerrero and her team, were awarded the 2014 Gabriel García Márquez Prize for Innovation in Journalism, the most prestigious journalism honor in Latin America.

I created Radio Ambulante, a Spanish language podcast telling uniquely Latin American stories. We have been at the forefront of the Latino and Latin American podcasting scene since our launch just four years ago. Since then, we’ve produced over 50 episodes from more than twenty countries — stories about politics and sports, about love and sexual identity, about human rights and family ties. Our groundbreaking work has been celebrated across the US and Latin America, and was honored with a García Marquez Prize for Innovation in Journalism in 2014. We’ve produced four live shows in New York, San Francisco and Los Angeles, all of which have sold out and received glowing reviews. Through our partnerships with nationally recognized shows like Radiolab and Reply All, as well as international print and web outlets like the New York Times Magazine and BBC Mundo, our content reached over 4 million people in 2015. As Executive Director and founder of Radio Ambulante, I’ve put the team together, have helped map the editorial direction of each season, and created work flows for a geographically dispersed team and network of producers. We’re now in the process of developing ancillary products so that the project can continue to grow sustainably.