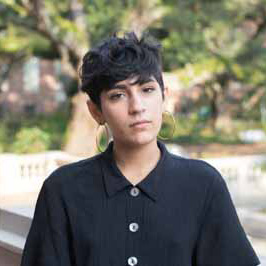 My concept for the fellowship would be furthering the work my colleague, Madison Hall, and I began with “The Transgender Homicide Project,” a database meant to track every killing of a trans person in the US.

We started the project as a way to compile all of the killings that occurred across 2019, 2020, and 2021 in what the American Medical Association has called an “epidemic of violence.”

As a tiny team of two, we began work on the project in December 2020, pulling together police reports on every trans homicide across the country to track information like race, gender, age, and location.

The database breaks down the trends in this public health crisis by analyzing racial disparities, regional differences, and methods of death in addition to how often victims were misgendered by local authorities and media.

We found that Black trans women, in particular, are incredibly vulnerable to this violence and are killed at much higher rates than their non-Black counterparts. Our data also revealed trans people in the American South and Puerto Rico are the most at risk.

Currently, no national media organization or US governmental body tracks the epidemic of violence. Our project is the first database of its kind and pushes forward the boundaries of digital journalism by utilizing interactive data visualization and the written word in a well-rounded package.

This data is crucial to finding a solution to the crisis, as every public health expert we spoke to said tracking these deaths is the first step to finding actual policy measures to help.

Since publishing the database on April 20, 2021, we’ve gotten national media attention for bringing awareness to the transphobic killings sweeping the country, appearing on TYT, MSNBC, and NBC. The project has also been shared by lawmakers like Washington Congress Rep. Pramila Jayapal and Pennsylvania Attorney General Josh Shapiro.

I believe the MJ Bear fellowship would provide me with guidance and resources to expand the project further, reaching more people and tracking these deaths even further back, as the earliest known efforts of tracking this data only go back as far as 2009.

I would like to collaborate with one local organization or LGBTQ center in each US state to serve as a point of contact to track killings that may have been missed by local media or misrecorded by police. I would also like to connect with families of victims of trans homicides with local aid organizations.

My vision for the project is inspired by Out Magazine’s Transgender Obituatiries Project by Raquel Willis, The Guardian’s The Counted, and ProPublica’s Lost Mothers.

Eventually, I would like for the database to serve as a record of all the lives lost, and a place for people to correct the misgendering of their trans loved ones by police and media after death by contacting us and/or their local LGBTQ center.