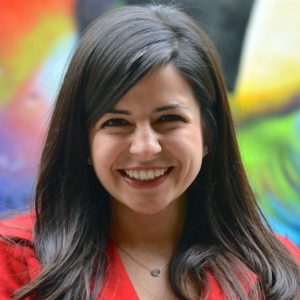 Tania founded Give Me Your Tired, a weekly newsletter on global migration news in response to the changing immigration laws and perceptions of refugees, migrants and asylum-seekers worldwide. Its name comes from the first line of Emma Lazarus’ famous poem engraved below the Statue of Liberty.

Produced with Lolita Brayman, a former journalist who is an immigration attorney, the newsletter includes short blurbs on key U.S. and global immigration news developments along with links to the week’s most important stories on migration policy. Tania says it is geared towards U.S. readers, but that it puts the Trump administration’s actions in a global context to show that what’s happening in the United States often is not unique.

Among the issues covered are family separation at the U.S. border, the EU’s efforts to prevent migrants from crossing the Mediterranean Sea, Australian offshoring of asylum-seeker processing, and what the recent Italian, Mexican and Venezuelan elections meant for migrants.

In the first seven months since its launch, subscriptions to the newsletter have grown rapidly through word of mouth.

“The goal is to help people — whether fellow journalists, lawyers, students or ordinary folks — make sense of a tsunami of immigration news and really understand what’s happening beyond the noisy political rhetoric,” Tania says.

Tania says her career path has been defined by growing up with an immigrant father and grandparents from Greece.

“Being the child of an immigrant shapes how I interpret the U.S. conversation about immigration policy — and gives me insight into the humans behind the numbers and political rhetoric when I report on immigration and refugees in the U.S. and abroad.”

The MJ Bear Fellowship Selection Committee said, “Tania has established a very valuable news source dealing with a timely and important issue — immigration. Every journalist who covers immigration should subscribe if they want help understanding the sometimes very complicated bits and pieces of immigration laws. “Give me Your Tired” is one of the best/newsiest of the newsletter approaches, and the fact that she created it and maintains it with the help of only one other person is exemplary.”
Said her recommender Angilee Shah, senior editor of Global Nation at Public Radio International, where Tania works as a contributing editor and reporter: “Tania’s newsletter, ‘Give Me Your Tired’, is a smart read that shows Tania’s ability to synthesize information quickly and get to the core of migration stories. She’s been able to connect the global dots on migration patterns and crises happening in the US and abroad. The newsletter is valuable for those of us on the immigration beat… Tania is among the most resourceful and creative reporters I’ve worked with as an editor.”

Tania has worked as a freelance foreign correspondent specializing in refugees, global migration and U.S. foreign policy since 2014. Before that, she covered New York courts and U.S. immigration for the New York Law Journal, a daily newspaper. Her work has appeared in The Wall Street Journal, Reuters, Public Radio International, World Policy Journal, Al Jazeera America, the New York Times’ Women In The World, and BBC World Service Radio, among others. She has reported from Beirut, Istanbul and Athens, and was a 2015-16 Fulbright Fellow in Greece.

In 2017, she was a journalism instructor at the Medill-Northwestern High School Journalism Institute (better known as “Cherubs”). She loves mentoring and teaching young journalists.

Tania is a graduate of the Medill School of Journalism at Northwestern University, where she earned bachelor of science degrees in Journalism and Political Science. She is currently working part-time on her Masters degree in International Human Rights Law at the University of Oxford, England.