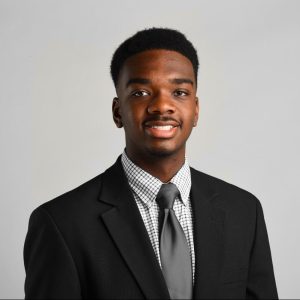 Donovan Dooley is a rising media professional who has aspirations of transforming the landscape of digital journalism. As a graduating senior at North Carolina Agricultural and Technical State University, Dooley has compiled an impressive resume that speaks not only to his talent but to his values as well. He was the only freshman to be named to the inaugural class of ESPN’s Rhoden Fellowship in 2017. Learning under the tutelage of legendary Sports Columnist Bill Rhoden, Dooley gained valuable journalistic experience that allowed him to strengthen his voice in digital journalism by covering various issues that related to race, sports and culture. He most notably produced content at the 2017 and 2018 Celebration Bowl, the 2018 CIAA tournament and the 2018 NFL Draft. Following that experience, Dooley accepted the challenge of working with CBS News in Washington D.C. in the summer of 2019. While with CBS, he learned how to cover hard news and was able to expand his journalistic palette. Dooley also started his own media company called TrueBulll.com in 2017 that assists young journalists with their maturation into the industry. Dooley is excited to see what his future holds following his graduation in December of 2019.