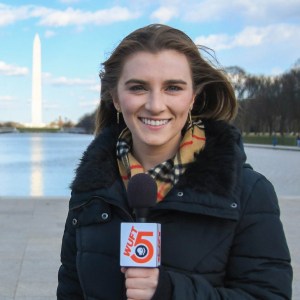 Dolores Hinckley is a producer and reporter for WUFT News. In her time at the station, Dolores has also worked with NPR national, covering Hurricane Michael from ground zero in Panama City and the protest of white nationalist Richard Spencer at UF. In Spring 2019, Dolores interned for CBS’ “60 Minutes,” where she assisted in researching upcoming pieces for the acclaimed news magazine, including the profile of Samuel L. Jackson. Following her semester in New York, Dolores spent Summer 2019 interning for the Associated Press in Rome, covering Italy and the Vatican as a video and print journalist, prior to her graduation in May of 2020. Born in Italy and raised in the U.S., Dolores one day hopes to work as a foreign correspondent for an American outlet, telling compelling stories wherever they may be. When she’s not pursuing a story, Dolores loves to fence épée and travel to compete with the UF club fencing team.