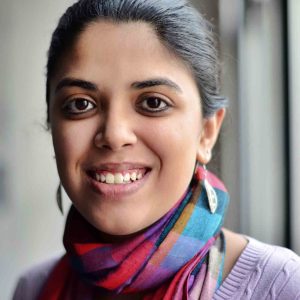 Veda Shastri is an immersive storytelling producer at The New York Times. She produces both short form 360 video news stories as well as NYTVR (New York Times Virtual Reality) documentaries. She was previously the International producer of The Daily 360 at the Times, producing over 100 stories from around the world, including the series “Genocide’s Legacy,” coverage of the Rohingya refugees, and an interactive from inside Fukushima, Japan.
Prior to joining the Times, Veda co-produced the VR documentary, “Return to Chernobyl” for PBS Frontline. She was also previously a news producer for CNN-IBN in New Delhi, India. Veda has an MA from New York University’s Journalism and Documentary Film program, and a BA in Anthropology from Tufts University.