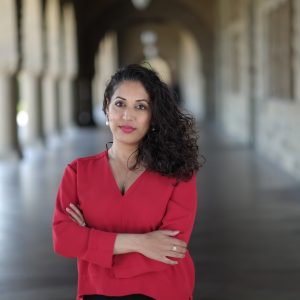 Seema Yasmin is an Emmy Award-winning journalist, poet, medical doctor, and author of Muslim Women Are Everything: Stereotype-Shattering Stories of Courage, Inspiration and Adventure. She is director of the Stanford Health Communication Initiative, clinical assistant professor of medicine in the Department of Medicine at Stanford University, and a medical analyst for CNN. Her reporting appears in the New York Times, Rolling Stone, WIRED, Scientific American, and other outlets. Yasmin is the recipient of two grants from the Pulitzer Center on Crisis Reporting which allowed her to report on witch hunts and gender violence in India and Ebola survivors in Liberia. Her next book, Viral BS: Medical Myths and Why We Fall For Them will be published in January 2021.