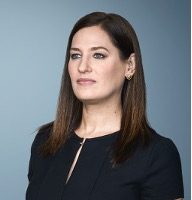 Rachel Smolkin is the vice president of news for CNN Digital Worldwide, where she oversees the national, politics and breaking news teams and coverage across CNN’s global digital platforms. Smolkin’s leadership brings together the core of CNN’s US-based journalism on the biggest issues facing the nation today, including voting rights, race, equality, policing, climate and education. Previously as the vice president and executive editor of CNN Politics, Smolkin launched CNN’s politics and Washington brand in the digital space, hiring and building a team of more than 50 reporters, editors and social producers into the No. 1 politics site for five years and counting, per ComScore. She partners with television, newsgathering, video, product, technology, audience development, research, finance and operations teams to create consumer experiences that inform and empower people in a time of turbulence and misinformation. Smolkin emphasizes innovative user experiences for public service and explanatory work, fact checking, elections interactives and newsletters that dissect politics and Washington for both domestic and international audiences. She is a graduate of the Sulzberger Executive Leadership Program at Columbia University and holds a bachelor’s degree from Brown University. Smolkin is now pursuing her executive MBA as a Batten Media Fellow at the University of Virginia’s Darden School of Business, Class of 2023. She is a past managing editor at Politico, editor at USA Today and managing editor of American Journalism Review magazine.