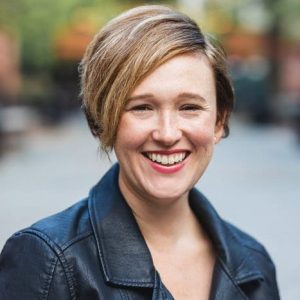 Katherine Goldstein is the creator and host of The Double Shift podcast, a groundbreaking, reported show about a new generation of working mothers. She runs Double Shift Productions as an independent journalism company. An award-winning journalist and 2017 Nieman Fellow at Harvard University, her track record for conversation-setting work includes the viral New York Times op-ed, “The Open Secret of Anti-Mom Bias in the Workplace,” “I was a Sheryl Sandberg superfan, Then her “Lean In” advice failed me” and “Where are the Mothers?” Previously, Katherine worked as a newsroom leader at Slate and HuffPost, and now lives in Durham, N.C. She the mother to a four-year-old son. The second season of The Double Shift is currently in production.