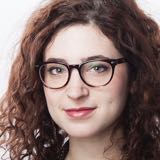 Erica Berger is a writer for a variety of publications including Fast Company and Quartz, and spends most of her time as the founder of Catchpool, a startup at the intersection of media and mindfulness. She also has co-founded and for the last four years run Mileage Media, a community connecting people between NYC, London, LA, and San Francisco. She started her career in documentary film, then in innovation at The Economist, then helped the recently acquired social journalism startup, Storyful (now part of News Corp), grow.

She is an Advisory Board Member of NPR’s millennial board, Generation Listen, is one of Forbes 30 Under 30 in media, is the NY and LA ambassador for the Thousand Network, a Starting Bloc fellow, and is originally from Chicago. In her free time, you can find her traveling, playing and listening and dancing to music, hiking and surfing (the ocean, not just the web), on her yoga mat, or you can follow her @GoodBerger.